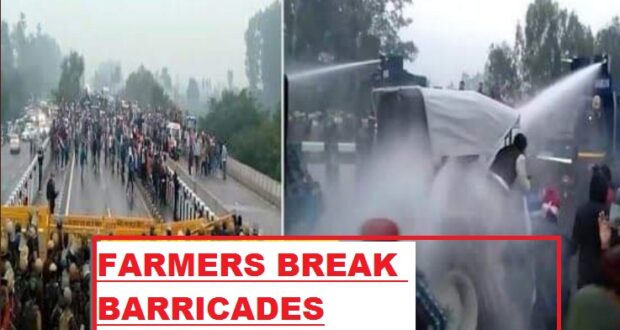 Farmers from Punjab protesting the new farm law assembled in huge numbers at the Delhi-Haryana borders on Thursday morning, forcing the police in the national capital step up security and put barricades at several places. Undeterred the farmers tried to remove barricades leading to police resorting to tear gas, water canons and even drones to stop them.

The farmers, as part of their “Delhi Chalo” march, have also threatened to block all roads to Delhi if authorities stopped them during their march. The requests from the farmers’ groups to hold rallies in Delhi have been denied owing to the coronavirus pandemic and many leaders of the agitation are put in house arrest already.

This young protestor jumped on to the the water cannon, turned the tap off and jumped right back on to his trolley, during yesterday’s protest at Punjab-Haryana border. #BharatBand #bharatbandh pic.twitter.com/doXYQ5cWTC

Delhi Police and the Haryana Police have erected barricades and sand trucks to stop the protesting farmers who are marching towards Delhi in large numbers in their tractors, at the Singhu border, Faridabad and Gurugram borders. “Security on both sides of the Tikri Border was reinforced in coordination with the Haryana Police to prevent any untoward incident in the wake of ongoing farmer’s agitation and Covid-19,” said DCP Outer Dr. A.Koan.

The Delhi Police requested the farmers to cooperate failing which legal action will be initiated as per the law. “All the requests received from the various farmer organisations regarding protest in Delhi on 26 and 27 November have been rejected and this has already been communicated to the organisers,” Eish Singhal, Delhi Police PRO said.

Meanwhile in Delhi, the Delhi metro services in some areas have been curtailed till 2 p.m. and a heavy police deployment at the Ghazipur border, DND and Chilla as a preventive measure. Several routes have also been diverted by the Delhi traffic police.

“All motorists are hereby advised to avoid Delhi Borders in view of the protest march called by All India Kisan Sangharsh Coordination Committee on 26 & 27 November against the Central Government’s Farm Laws,” the Delhi traffic police tweeted.