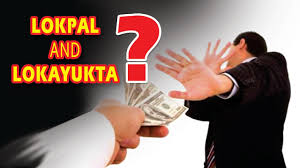 The Lokpal and Lokayuktas Act, 2013 came into force w.e.f. 16.01.2014. The Government initiated the process for appointment by convening the Selection Committee meeting on 03.02.2014. The Selection Committee under section 4(1) of the Act, also constituted an eight Member Search Committee on 21.02.2014 in terms of section 4(3) of the Act. Two members of the Search Committee declined the offer of appointment. Looking into such difficulties experienced and to remove certain difficulties in the operationalisation of the Act including issues relating to appointment of Chairperson and Members of Lokpal, etc. in the absence of a Leader of Opposition recognized as such in the Lok Sabha, the Government introduced the Lokpal and Lokayuktas and other related law (Amendment) Bill, 2014 in Lok Sabha on 18.12.2014. The Bill was referred to the Department –related Parliamentary Standing Committee on Personnel, Public Grievances, Law and Justice for examination and report. The said Committee has submitted its report in the Parliament on 07.12.2015. The recommendations of the said Committee were presented before an Inter-Ministerial Committee (IMC) comprising seven Union Ministers. The recommendations of the IMC are under consideration of the Government.

This was stated by the Union Minister of State (Independent Charge) for Development of North Eastern Region (DoNER), MoS PMO, Personnel, Public Grievances, Pensions, Atomic Energy and Space Dr. Jitendra Singh in a written reply to a question by Shri Sanjay Raut in the Rajya Sabha today.