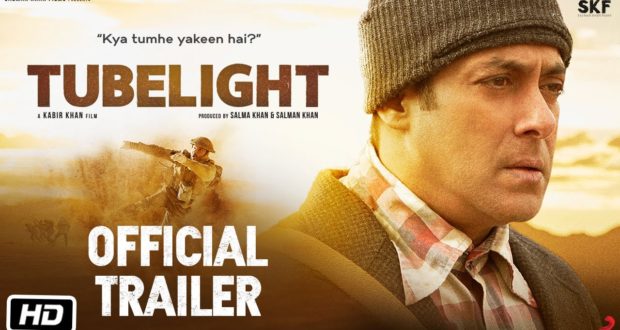 Salman Khan starrer ‘Tubelight’ for 2017 Eid release could not take off despite high expectations in Bollywood about the film that has a story line similar to many of his films earlier like “Bajrangi Bhaijaan’ or ‘Sultan’.

Despite good and bad reviews, never did Salman Khan’s film faced such low collections, hinting at revamp required for the actor’s past collection records. Based on Hollywoood flick, ‘Little Boy’ with a slight change in storyline to suit local conditions when the 1962 Sino-Indian War took place.

The film was also the last one by late Bollywood legend, Om Puri, while Chinese actress Zhu Zhu and child artist Martin Rey Tangu were roped in key roles. With director Kabir Khan, this is the second film by the duo after the massive success of ‘Bajrangi Bhaijaan’.

Here is a short list of his popular hit films:

Salman Khan’s record has always been good in box office collections and he was marveled as the unique actor who could bring in moolah for the producers. His first film in 1988 ‘Biwi Ho To Aisi’ was just a passable one while his next film turned the table around as box office starrer with Sooraj R. Barjatya’s romantic family drama Maine Pyar Kiya in 1989, one of India’s highest-grossing films, besides winning several awards.

However success delued him again untill 1994 when “Hum Aapke Hain Koun..!!” with madhuri Dixit virtually thnundered the box office collections and awards for Salman Khan changing the course of his film career. Earning over Rs.135 crore, it was the biggest hit of 1994, breaking all previous records.

In 1995 his film with Shah Rukh Khan in Rakesh Roshan’s ‘Karan Arjun’ based on reincarnation theme went on to become the second biggest hit of the year. But again a spell of below average fillms followed until ‘Hum Saath-Saath Hain’ and ‘Biwi No.1’, both of which were the highest-grossing films of 1999.

It was almost a decade of ups and downs for his film career until ‘Dabangg’, which was released on Eid, 10 September 2010 that went on to earn Rs.215 crore becoming the highest-grossing Bollywood film of 2010.

His next film two years later with Katrina Kaif ‘Ek Tha Tiger’ went on to become the second Bollywood film to gross over Rs.300 crore behind only ‘3 Idiots’ of Aamir Khan. In the same year 2012, ‘Dabangg 2’, a sequel of Dabangg, grossed Rs.250 crore.

His next film in 2014 was ‘Jai Ho’ that was just above average but followed by ‘Kick’ in the same year that entered the Rs.200 crore club.

In 2015, ‘Bajrangi Bhaijaan’, released on Eid became the second Bollywood film after ‘PK’ to enter Rs.300 crore club. Last year’s film on Eid, “Sultan” became the second film of Salman Khan to nett over 300 crores with a gross collection amount of Rs.583.26 crore worldwide. Compared to these box office collections, “Tubelight” is not only slow but never bright either like a typical tubelight after it glows.