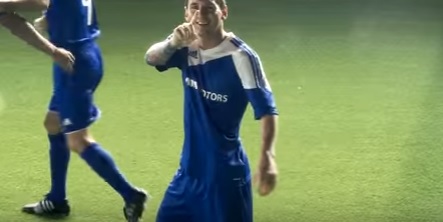 Messi is popular as brand endorser of Tata Motors in India

Football star player Lionel Messi finally married his childhood sweetheart Antonella Roccuzzo on Friday at his Argentine hometown Rosario, amid presence of top football players and celebrities including pop singer Shakira, billed as the “wedding of the century” in local media.

After Messi said, “I do” to his bride whom he knew for two decades, they reached a hotel where the glitteratti and celebrities gathered while Shakira and her husband, Messi’s teammate Gerard Pique, joined the other 260 guests including Neymar and Luis Suarez.

The top player, who is facing a court case over tax evasion, was seen happy at last over the domestic events taking priority over game, name and fame. Messi and Roccuzzo will soon move to Barcelona in Spain where he plays for FC Barcelona.

A winner of top Ballon d’Or award five times, Messi has become iconic figure among the football fans and he was even featured in TATA car endorsement in India last year.

Some reactions on social media Twitter were hillarious to modest.

Finally after a relationship of 10 years #Messi is all set for the wedding with his girlfriend and mother of his 2 sons #messiwedding pic.twitter.com/RXXAY6Fedu

The squad have arrived for Leo Messi’s wedding.#messiwedding #FCBarcelona pic.twitter.com/5amcwyQBaD

Bunch of roses .. Box of happiness . @TeamMessi @antonellarocuzz ??? .. Wish u all giggles and togetherness .. ???#messiwedding #hitched ?

Imagine being so lucky to play with Messi and eventually get to attend his wedding. Thats being Blessed y’all. #messiwedding