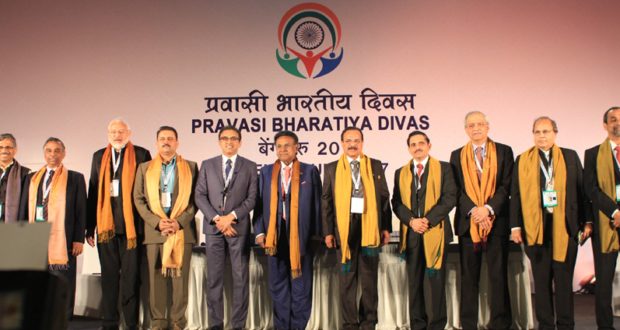 The Union Minister for Statistics and Programme Implementation, Shri D.V. Sadananda Gowda in a group photograph at the Plenary Session- VIII: on Leveraging Diaspora Expertise for Knowledge and Innovation, at the Pravasi Bharatiya Divas (PBD-2017) convention, in Bengaluru, Karnataka on January 09, 2017.(PIB Photo)

The Pravasi Bharatiya Divas celebrations, being held in Bangalore from January 7-9,2017, came to close on Monday with the presentation of Pravasi Bharatiya Samman awards to recipients from Canada to Trinidad & Tobago by President Pranab Mukherjee.

PBD conventions are being held every year since 2003 and we have been honoring our Pravasis since the first edition. Since it was decided late last year to hold the PBD conventions after an interval of two years. Therefore, the number of awards to be conferred for PBD 2017 have been doubled to 30.

The Jury can also make up to six suo-motto nominations for persons from the fields in which the awards are to be conferred. This year, the jury also considered Pravasi’s contribution for achievements on philanthropic investments and charitable work in India and for contribution towards India’s development.

The Jury members considered several eligible nominations and unanimously recommended 30  for Pravasi Bharatiya Samman Awards, 2017 by the Committee on December 20,2016. The list is as follows: