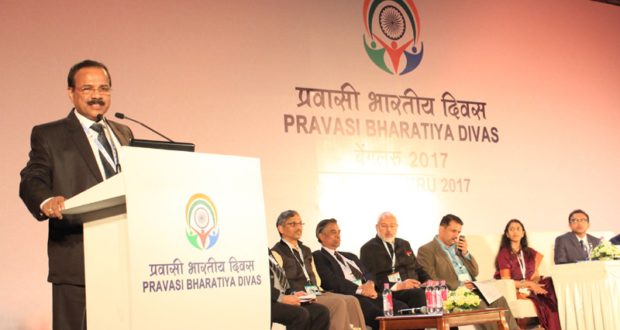 President of India Mr. Pranab Mukherjee in his Valedictory Address at the 14th Edition of the Pravasi Bhartiya Divas Convention on Monday asked the diaspora to be foremost emissaries of Indian story in the world and conferred the Pravasi Bhartiya Samman Awards on recipients at the closing ceremony in Bengaluru.

Speaking on the occasion, the President expressed hope that the Indian Diaspora across the world will remain foremost emissaries of the unfolding Indian story. Since they are the people exposed to the best of western technology and yet having their civilisational moorings in the ageless and eternal ethos of India, they are doubly blessed for the task, he noted.

The synergy of the west and the east that they represent, provides them with a unique position and opportunity that involves sharing knowledge between their home land and their adopted countries, said the President. While they showcase India to their host countries, they also bring along the cultural heritage of their adopted lands to India in true spirit exemplifying our belief in ‘Vasudhaiva Kutumbakam’, said Mr. Mukherjee.

The President said , “Establishing linkages between the Government of India’s skilling programmes and the skill gap that exists amongst the migrant workforce will go a long way in enhancing their employability as well as earnings.”

The President also released a compilation of Selected Speeches by the Prime Minister Narendra Modi on foreign policy on the occasion. 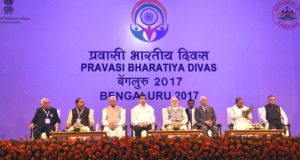