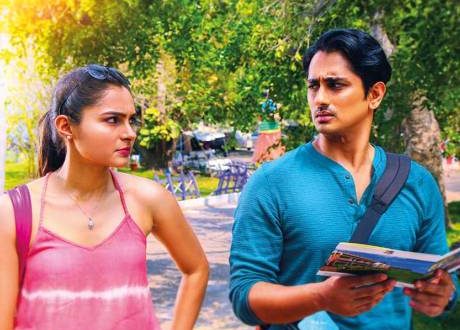 Gruham hero Siddharth, who played lead role alongside Andrea Jeremiah in horror film Gruham released on November 17th and he also co-produced it in association with Viacom 18 Motion Pictures and Etaki Entertainment, thanked the audience for making the film a success. Its overseas box office collections were around $13,500 on the opening day alone.
Gruham is not just another horror film, but it is on par with Hollywood standards, he said. Siddharth, Andrea, Anisha Victor, Atul Kulkarni and Suresh’s performance and Girish’s background score are major highlights of the film, he noted while giving an interview to a TV channel.
Recently, Siddharth has also hinted at a sequel to the movie. Siddharth, a doctor with his wife, played by Andrea Jeremiah, encounter horror and come out of it. The film is purportedly based on a true story. Directed by Milind Rau the film was released in Hindi, Tamil and Telugu.
Shreyaas Krishna’s cinematography and Milind Rau’s unique story-telling with DI Coloring Cinema backdrop helped the movie do better. In fact, Gruham is a complete horror film after ages and it is raking in good numbers from theaters with positive talk all over, he said.
“It is once again proved that, Telugu spectators will always encourage films with potential content. I thank one and all for making Gruham that was released in Telugu, Tamil and Hindi languages a super hit,” he said.
Viacom18 team said, “It’s been long time since a perfect horror movie hit the Telugu screens. We didn’t compromise on anything to make Gruham as to provide such different experience to audience over here. It’s a pleasure feeling to receive overwhelming response for artists performances and technical brilliance from audience as well as critics.”
avvaal gruham box office collections gruham in tamil gruham success siddharth movie gruham 2017-11-19
Staff Writer