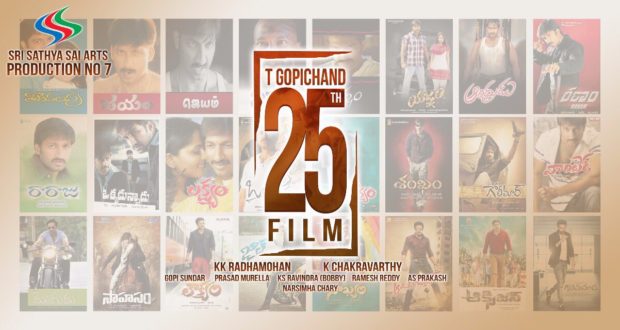 After delivering hit films like Andhrudu, Yagnam, Lakshyam, Shouryam and Loukyam, our hero Gopichand’s 25th film is launched on Sunday, Nov.19 at Ramanaidu Studios, Hyderabad. This prestigious project will be produced by Bengali Tiger fame KK Radhamohan on the banner of Sri Satya Sai Arts.
K. Chakravarthy, who provided wonderful screenplays for blockbuster films like Balupu, Power and Jai Lava Kusa will be introduced as director. While VV Vinayak sounded the claps for first muhurtham shot, TFDC Chariman P Ram Mohan Rao switched the camera and Dil Raju directed the first shot.
On this occasion producer KK Radhamohan said, “This is my 7th film as producer on Sri Sathya Sai Arts banner. Our last hit film Bengal Tiger was also kick started with muhurtham in the same area where now our new movie began today and I feel very happy. I hope, this movie will also score big success as Bengal Tiger. Gopi Sundar is providing music and Prasad Murella will be cranking the camera. K Chakravarti is getting introduced as director with this movie. Regular shooting will begin from December 16th.”
Director K Chakravarthy (Chakri) said, “I thank my hero Gopichand, producer KK Radhamohana for giving me an opportunity to direct this film. I am happy and I also feel more responsible because this Gopichand’s 25th film.” Heroine Mehreen said, “I am so fortunate that my 5th film is coincided with Gopichand’s 25th film. It is a pleasure to be part of such good movie and talented crew.”

Hero Gopichand said, ‘Story narrated by Chakri is very good. Regular shooting will be commenced from December 16th. We all know how powerful message my father’s films used to carry. Along with a good message, this film will have all the commercial elements. I also feel happy to work on Radhamohan’s banner.”

Artists: Gopichand, Mehreen, Prithvi and Jayaprakash Reddy and others.