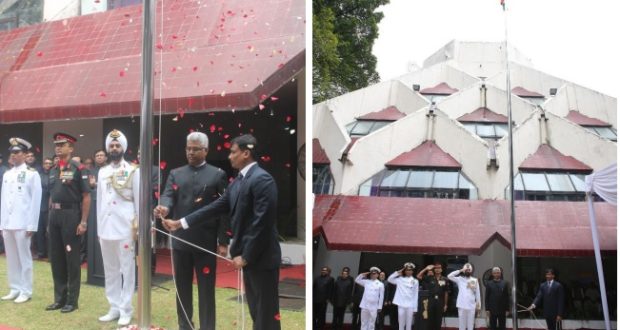 Mr. Manish, Deputy Chief of Mission, hoisted the National Flag at the Indian Embassy premises as large gathering of Indian nationals and members of Indian diaspora watched with pride and joy. Similar ceremonies took place at the Indian Consulates in Bali and Medan.

The President’s address to the nation on the eve of Republic Day was read out by the Deputy Chief of Mission in Jakarta and the Consuls General in Bali and Medan.

President’s address touched upon several issues such as inclusive innovation; rapidly evolving science and technology and need for education system to evolve with it; demonetization; aspirations of youth; employment generation; pluralism and tolerance; and public welfare.

Other flagship programs of the government such as Swachh Bharat Mission, MGNREGA, Aadhaar, Digital India, Atal Innovation Mission and Skill India, the President noted in his address, are designed to promote well-being of the society. President’s speech urged Indian to work hard to overcome poverty, unemployment and deal with terrorism and to ensure pluralist culture and tolerance for a better of the country and the people.

Nearly 300 members of the Indian community, Persons of Indian Origin and Friends of India participated in the Republic Day ceremony and about 80 school children from three Indian schools in Indonesia – Gandhi Memorial International School, the Rama International School and Texmaco DPS School – sang the National Anthem and patriotic songs.

The students of Jawaharlal Nehru Cultural Centre (JNICC) also performed a songs event with patriotic songs and a dance on the occasion. Later, Deputy Chief of Mission Manish interacted with members of Indian community and gave a broad overview of various functions scheduled to be held in future by the Mission. The event was followed by a feast of Indian food delicacies served to the visitors.