The ancient ruins of Çatalhöyük, in modern Turkey, revealed that its inhabitants – 3,500 to 8,000 people at its peak – experienced overcrowding, infectious diseases, violence and environmental problems almost 9,000 years ago, said an international team of bioarchaeologists after 25 years of study.

The results paint a picture of what it was like for humans to move from a nomadic hunting and gathering lifestyle to a more sedentary life built around agriculture, said Clark Spencer Larsen, lead author of the study, and professor of anthropology at the Ohio State University.

“Çatalhöyük was one of the first proto-urban communities in the world and the residents experienced what happens when you put many people together in a small area for an extended time,” Larsen said. “It set the stage for where we are today and the challenges we face in urban living.”

Çatalhöyük, in what is now south-central Turkey, was inhabited from about 7100 to 5950 B.C. First excavated in 1958, the site measures about 32 acres, with nearly 21 meters of deposits spanning 1,150 years of continuous occupation. 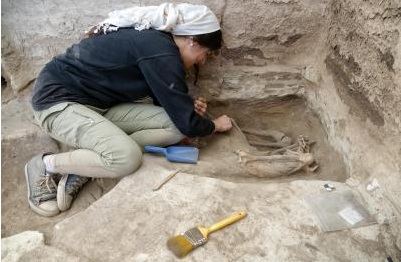 Çatalhöyük began as a small settlement about 7100 B.C., likely consisting of a few mud-brick houses in what researchers call the Early period. It grew to its peak in the Middle period of 6700 to 6500 B.C., before the population declined rapidly in the Late period and was abandoned at about 5950 BC.

Farming was always a major part of life in the community. The researchers analyzed a chemical signature in the bones – called stable carbon isotope ratios – to determine that residents ate a diet heavy on wheat, barley and rye, along with a range of non-domesticated plants.

Larsen, who began fieldwork at the site in 2004, said,”They were farming and keeping animals as soon as they set up the community, but they were intensifying their efforts as the population expanded,” Larsen said.

Other research suggests that the climate in the Middle East became drier during the course of Çatalhöyük’s history, which made farming more difficult. Besides, they suffered from a high infection rate, most likely due to crowding and poor hygiene.

During its peak in population, houses were built like apartments with no space between them – residents came and left through ladders to the roofs of the houses.Excavations showed that interior walls and floors were re-plastered many times with clay.

“They are living in very crowded conditions, with trash pits and animal pens right next to some of their homes. So there is a whole host of sanitation issues that could contribute to the spread of infectious diseases,” Larsen said.

The crowded conditions in Çatalhöyük may have also contributed to high levels of violence between residents, according to the researchers.

In a sample of 93 skulls from Çatalhöyük, more than one-fourth – 25 individuals – showed evidence of healed fractures. Larsen said the significance of Çatalhöyük is that it was one of the first Neolithic “mega-sites” in the world built around agriculture.

“We can learn about the immediate origins of our lives today, how we are organized into communities. Many of the challenges we have today are the same ones they had in Çatalhöyük – only magnified.”

Their paper was published on June 17, 2019 in the Proceedings of the National Academy of Sciences.