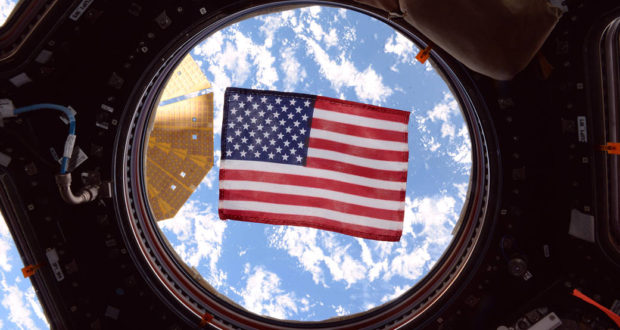 NASA astronaut Jack Fischer took this photograph of an American flag in one of the windows of the International Space Station's cupola, a dome-shaped module through which operations on the outside of the station can be observed and guided. Throughout NASA's history, spacecraft and launch vehicles have always been decorated with flags.(NASA)

US space agency NASA has denied global hackers group Anonymous claim that it is going make announcement on the discovery of alien life, said a spokesman.

Last week, the hacking group Anonymous posted a video on YouTube that said NASA is about to announce the discovery of life in our galaxy but NASA scientist beyond Earth.

“Contrary to some reports, there’s no pending announcement from NASA regarding extraterrestrial life,” said NASA science chief Thomas Zurbuchen in a tweet.

“Are we alone in the universe? While we do not know yet, we have missions moving forward that may help answer that fundamental question,” Zurbuchen said.

In fact, Anonymous has put out its video based on Zurbuchen’s testimony to the House of Representatives’ Committee on Science and Space in April this year. However, NASA has always maintained that there is no discovery of alien life and Anonymous video (see below) has surprised many.

Anonymous on their website said, “NASA says aliens are coming!” and  uploaded the above video citing alien-friendly comments made by NASA astronauts and space scientists.

Anonymous quoted Zurbuchen’s rendering before a Congressional hearing in April titled “Advances in the Search for Life” that said: “NASA`s recent advances, such as the discovery of hydrogen in Saturn`s moon Enceladus and the Hubble team’s promising results from the oceans of Jupiter`s moon Europa, are promising signs that we’re closer than ever to discovering evidence of alien life.”

“Taking into account all of the different activities and missions that are specifically searching for evidence of alien life, we are on the verge of making one of the most profound, unprecedented, discoveries in history,” Zurbuchen said. Perhaps the second part of the quote has made Anonymous see NASA forthcoming with an announcement.