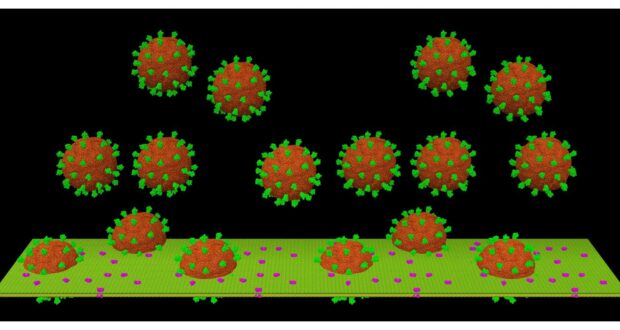 Structural model of SARS-CoV-2 infection. This structural model was built with UCSF Chimera using high-performance computers (Bridges Large and Frontera). The model shows 16 viruses, with the spike proteins shown in green (PDB ID: 6VSB) and an actual lipid bilayer membrane, with ACE2 dimers shown in magenta. All these structures are at atomic resolution. The length of the membrane is approximately 1 micrometer. CREDIT Victor Padilla-Sanchez, The Catholic University of America

In a modern era of business conglomerates and corporates taking over the daily lifestyle, here is a man who had tested a concoction of herbal medicines when his brother was down with Covid-19 infection a couple of months ago and succeeded in creating one that defies logic, reason and above all the global standards of modern science keen to fight Covid-19 for at least three years.

Bonigi Anandaiah, in his 50s, has brought the tiny town of Krishnapatnam to prominence in Google Maps with tens of thousands searching frantically for directions to drive early this week when Nellore District authorities descended on the coastal town in Andhra Pradesh.  An uncertified Ayurvedic practitioner of herbal medicine from the days of his mother, Anandaiah has kept the town away from Covid surge and deaths for over a month now.

When corporates are gearing up for a minimum charge of Rs.5 lakh per person to treat for Covid-19, defying medical insurance caps for any single disease, here is a man giving away his medicine free of cost, the way the Centre is giving half of the vaccines to States free of cost. He never charged anybody for the medicine and started the venture on a voluntary basis with the help of local people.

Unable to grasp the value of freely available medicine, local authorities tried to shut down his effort for two days until the YSRCP MLA from Sarvepalli, Kakani Govardhan Reddy, intervened and announced that the new cure for Covid would be distributed from Friday morning. More than 50,000 Covid patients and their relatives have flocked the open grounds in Krishnapatnam waiting for the miracle medicine.

The main concern being that Covid norms were being violated, the police too have stepped in to coordinate and control the crowds. The videos of Telugu news channels and local video channels have already stormed social media with the details of the Covid treatment, which is yet to receive ICMR evaluation on side effects, especially for eyes since it is given in eyes for critically ill patients with alarmingly low levels of oxygen.

Essentially, Anandiah is giving the medicine in the form of balls or liquid drops, containing natural antioxidants and components such as pepper, ginger, neem, turmeric, and tinospora codifolio, commonly known as giloy. Those who could not get vaccines that are perennially in short supply, are turning to Anandiah for Ayurvedic cure, even though there is no scientific sanctity behind his medicine that even some Ayurvedic pundits denied as authentic since honey is boiled for making the concoction.

Nellore Collector K.V.N. Chakradhar Babu had formed a committee consisting of officials and AYUSH doctors to evaluate the efficacy of the concoction which in its report said no adverse effects are seen in people who took the medicine. Meanwhile, samples have been sent for testing to a laboratory in Hyderabad, and the results are still awaited.

If he is allowed to patent the miracle medicine, it is likely to open up a new industry in this coastal town but reports suggest that the VIP culture has already taken the sheen away from the voluntary effort of Anandaiah, his brother and some locals. With police managing the show, many in the queue for days complain that half the medicine is being diverted to VIPs, notwithstanding the final evaluation of its side effects.