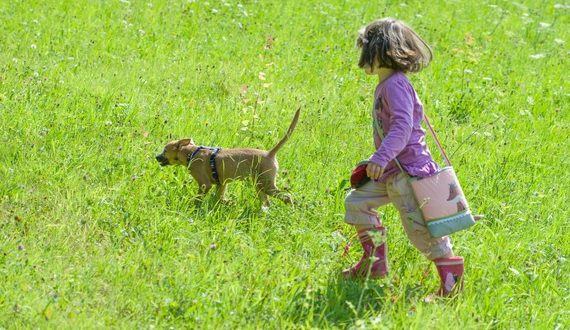 People trust their own dog and exclude the possibility of a bite incident. Credit Christian Damböck

From pugs to labradoodles to huskies, dogs are our faithful companions. They live with us, play with us and even sleep with us. But how did a once nocturnal, fearsome wolf-like animal evolve over tens of thousands of years to become beloved members of our family? And what can dogs tell us about human health? Through the power of genomics, scientists have been comparing dog and wolf DNA to try and identify the genes involved in domestication.

Amanda Pendleton, a postdoctoral research fellow in the Michigan Medicine Department of Human Genetics, has been reviewing current domestication research and noticed something peculiar about the DNA of modern dogs: at some places it didn’t appear to match DNA from ancient dogs. Pendleton and her colleagues in assistant professor Jeffrey Kidd, Ph.D.’s laboratory are working to understand the dog genome to answer questions in genome biology, evolution and disease.

Breed dogs, which mostly arose around 300 years ago, are not fully reflective of the genetic diversity in dogs around the world, she explains. Three-quarters of the world’s dogs are so-called village dogs, who roam, scavenge for food near human populations and are able to mate freely. In order to get a fuller picture of the genetic changes at play in dog evolution, the team looked at 43 village dogs from places such as India, Portugal and Vietnam.

Armed with DNA from village dogs, ancient dogs found at burial sites from around 5,000 years ago, and wolves, they used statistical methods to tease out genetic changes that resulted from humans’ first efforts at domestication from those associated with the development of specific breeds. This new genetic review revealed 246 candidate domestication sites, most of them identified for the first time by their lab.

Now that they’d identified the candidate genes the question remained: What do those genes do?

Upon closer inspection, the researchers noticed that these genes influenced brain function, development and behavior. Moreover, the genes they found appeared to support what is known as the neural crest hypothesis of domestication. “The neural crest hypothesis posits that the phenotypes we see in domesticated animals over and over again — floppy ears, changes to the jaw, coloration, tame behavior — can be explained by genetic changes that act in a certain type of cell during development called neural crest cells, which are incredibly important and contribute to all kinds of adult tissues,” explains Pendleton. Many of the genetic sites they identified contained genes that are active in the development and migration of neural crest cells.

One gene in particular stuck out, called RAI1, which was the study’s highest ranked gene. In a different lab within the Department of Human Genetics, Michigan Medicine assistant professor of human genetics Shigeki Iwase, has been studying this gene’s function and role in neurodevelopmental disorders. He notes that in humans, changes to the RAI1 gene result in one of two syndromes — Smith-Magensis syndrome if RAI1 is missing or Potocki-Lupski syndrome if RAI1 is duplicated.

Kidd said that they are using these changes that were selected for by humans for thousands of years as a way to understand the natural function and gene regulatory environment of the neural crest in all vertebrates.