When the Sun was just a baby four billion years ago, it went through violent outbursts of intense radiation, spewing particles across the solar system but these growing pains helped seed life on early Earth by igniting chemical reactions that kept Earth warm and wet. Ironic butthe same solar tantrums may have prevented life from forming on other planets such as Mars and Venus, by stripping them of atmospheres.

Prabal Saxena, an Indian-origin astrophysicist at NASA’s Goddard Space Flight Center in Greenbelt, Maryland, has spent his time researching on how space weather, the variations in solar activity and other radiation conditions in space, interacts with the surfaces of planets and moons.

Now, he and other scientists are realizing that the Moon, where NASA will be sending astronauts by 2024, contains clues to the ancient mysteries of the Sun. “We didn’t know what the Sun looked like in its first billion years, and it’s super important because it likely changed how Venus’ atmosphere evolved and how quickly it lost water. It also probably changed how quickly Mars lost its atmosphere, and it changed the atmospheric chemistry of Earth,” Saxena said. 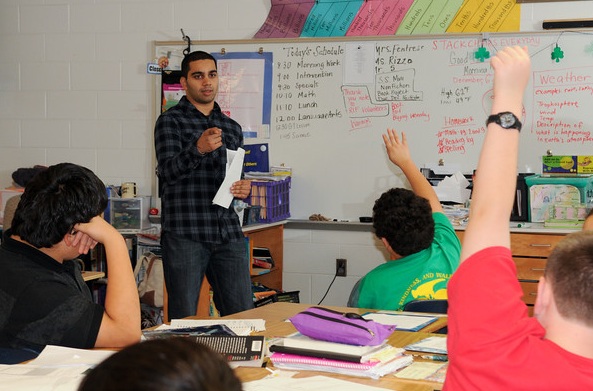 The Sun-Moon Connection Saxena stumbled into investigating the early Sun’s rotation mystery while contemplating a seemingly unrelated one: Why, when the Moon and Earth are made of largely the same stuff, is there significantly less sodium and potassium in lunar regolith, or Moon soil, than in Earth soil?

This question, too, revealed through analyses of Apollo-era Moon samples and lunar meteorites found on Earth, has puzzled scientists for decades — and it has challenged the leading theory of how the Moon formed.

Our natural satellite took shape, the theory goes, when a Mars-sized object smashed into Earth about 4.5 billion years ago. The force of this crash sent materials spewing into orbit, where they coalesced into the Moon.

“The Earth and Moon would have formed with similar materials, so the question is, why was the Moon depleted in these elements?” said Rosemary Killen, an planetary scientist at NASA Goddard who researches the effect of space weather on planetary atmospheres and exospheres.

The two scientists suspected that one big question informed the other — that the history of the Sun is buried in the Moon’s crust.

Using sophisticated computer models, Saxena, Killen and colleagues think they may have finally solved both mysteries. Their computer simulations, which they described on May 3 in the The Astrophysical Journal Letters, show that the early Sun rotated slower than 50% of baby stars. According to their estimates, within its first billion years, the Sun took at least 9 to 10 days to complete one rotation.

Earth’s atmosphere was once very different from the oxygen-dominated one we find today. When Earth formed 4.6 billion years ago, a thin envelope of hydrogen and helium clung to our molten planet. But outbursts from the young Sun stripped away that primordial haze within 200 million years.

As Earth’s crust solidified, volcanoes gradually coughed up a new atmosphere, filling the air with carbon dioxide, water, and nitrogen. Over the next billion years, the earliest bacterial life consumed that carbon dioxide and, in exchange, released methane and oxygen into the atmosphere. Earth also developed a magnetic field, which helped protect it from the Sun, allowing our atmosphere to transform into the oxygen- and nitrogen-rich air we breathe today.

“Had our Sun been a fast rotator, it would have erupted with super flares 10 times stronger than any in recorded history, at least 10 times a day. Even Earth’s magnetic field wouldn’t have been enough to protect it. The Sun’s blasts would have decimated the atmosphere, reducing air pressure so much that Earth wouldn’t retain liquid water. “It could have been a much harsher environment,” Saxena noted.

Apollo samples and lunar meteorites are a great starting point for probing the early solar system, but they are only small pieces in a large and mysterious puzzle. The samples are from a small region near the lunar equator, and scientists can’t tell with complete certainty where on the Moon the meteorites came from, which makes it hard to place them into geological context.

Since the South Pole is home to the permanently shadowed craters where we expect to find the best-preserved material on the Moon, including frozen water, NASA is aiming to send a human expedition to the region by 2024.