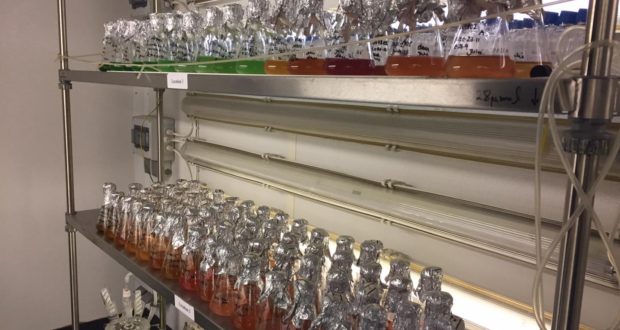 Cyanobacteria – which propel the ocean engine and help sustain marine life – can shift their colour like chameleons to match different coloured light across the world’s seas, according to research by an international collaboration including the University of Warwick.

The researchers have shown that Synechococcus cyanobacteria – which use light to capture carbon dioxide from the air and produce energy for the marine food chain – contain specific genes which alters their pigmentation depending on the type of light in which they float, allowing them to adapt and thrive in any part of the world’s oceans.

“Blue light is most prevalent in the open oceans, as it penetrates into deep waters – whereas in warm equatorial and coastal waters there is more green light, and in estuaries the light is often red”, explains David Scanlan, who is Professor in Marine Microbiology in the University of Warwick’s School of Life Sciences.

These specific ‘chromatic adaptor’ genes are abundant in ocean dwelling Synechococcus – enabling these colour-shifting microorganisms to change their pigment content in order to survive and photosynthesise in ocean waters, especially when the light quality changes from blue to green.

Professor Scanlan said: “Finding Synechococcus cells capable of dynamically changing their pigment content in accordance with the ambient light colour – abundant in ocean ecosystems, making them planktonic ‘chameleons’ – gives us a much deeper understanding of those processes essential to keep the ocean ‘engine’ running.

“This will help improve how we look after our waters – and will allow us to better predict how oceans will react in the future to a changing climate with increasing levels of carbon dioxide in the atmosphere.”

The researchers made their discovery using data from the Tara Oceans expedition – which took seawater samples from ocean waters all over the world.

This discovery represents a major breakthrough in our understanding of these organisms, which are key primary producers and potentially excellent bio-indicators of climate change.