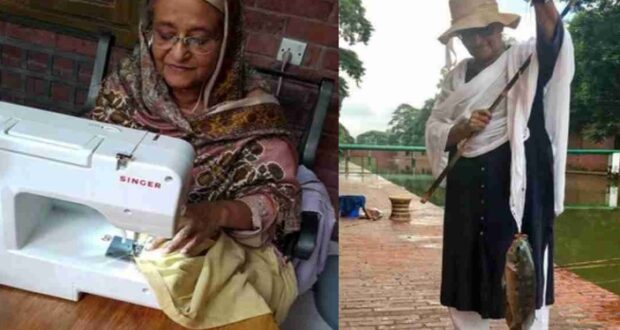 Recently two photos of Bangladesh Prime Minister Sheikh Hasina have gone viral on the social media giving people a glimpse of the leader’s daily life but claimed routine by her. In one photo, Hasina is seen working on a sewing machine wearing a traditional Bengali attire, while in the other the leader was snapped catching fish at the Ganabhaban lake, reports bdnews24.

The Prime Minister had earlier told Parliament that she had tweaked her routine amid the coronavirus pandemic, enjoying the thrill of fishing during her morning stroll. Soon, many Awami League leaders and followers have shared the photos on Facebook.

Salman Rahman, the PM’s adviser for private industry and investment, shared the photos and wrote: “Hon’ble Prime Minister Sheikh Hasina is a complete human being. She has successfully transformed the fortune of 170 million Bangladeshis, has given refuge to over a million Rohingya Muslims, but still finds the time to enjoy cooking, fishing and sewing.”

State Minister for Foreign Affairs Md Shahriar Alam in a post while sharing the photo of the Prime Minister fishing, wrote: “I don’t have the knowledge to put a caption.”

Another State Minister for ICT Zunaid Ahmed Palak shared both photos and wrote: “Our honourable prime minister, our leader Sheikh Hasina dressed as a common Bengali woman. She sews cloth and goes fishing at the Ganabhaban pond whenever she takes a break from a busy schedule. Much love and respect for this extraordinary person who works for the country all day long after losing everything.”