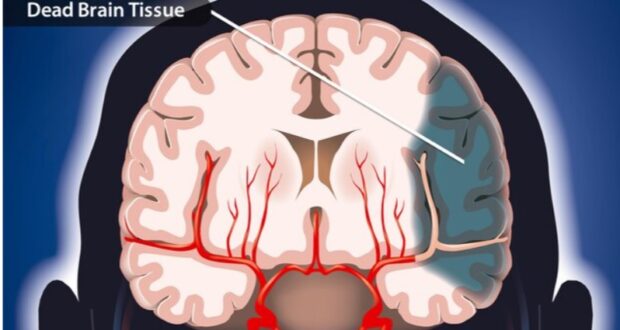 A UCLA-led study explains how COVID-19 increases the risk for stroke. Scientists made the finding by running fluid spiked with a COVID-19-like protein through a 3D-printed model of the arteries of a patient who had suffered a stroke.

Although COVID-19 was first identified by its severe respiratory symptoms, the virus has caused strokes in young people who had no known risk factors. But little is known about how the virus increases the risk for stroke.

UCLA researchers used a 3D-printed silicone model of blood vessels in the brain to mimic the forces generated by blood pushing through an artery that is abnormally narrowed, a condition called intracranial atherosclerosis. They showed that as those forces act on the cells lining the artery, and increase the production of a molecule called angiotensin-converting enzyme 2, or ACE2, which the coronavirus uses to enter cells on the surface of blood vessels.

“The flow directly influences ACE2 expression,” said Dr. Jason Hinman, an assistant professor of neurology at the David Geffen School of Medicine at UCLA and the study’s senior author. In addition to Hinman, the study’s authors are neurologists at the Geffen School of Medicine and scientists from UC San Francisco and the Veterans Health Administration. The paper was published (PDF) in Stroke.

UCLA researchers created the model using data from CT scans of blood vessels in a human brain. After creating the new model, researchers confirmed the particles did indeed interact with the cells lining the blood vessel, mostly in the regions of the brain with higher levels of ACE2.

“This finding could explain the increased incidence of strokes seen in COVID-19 infections,” Hinman said.

Another discovery offered an insight that eventually could help identify people with COVID-19 who may have a higher risk for stroke. When the scientists analyzed which genes were turned on in the endothelial cells after the coronavirus spike proteins bound to them, they found that the genes that were activated were a specific set of immune-response genes that are found in brain blood vessel cells, but not in endothelial cells from other organs of the body.

“There’s a unique brain endothelial response to the virus that may be helpful in identifying patients who are have a higher risk for stroke,” Hinman said. The researchers intend to conduct follow-up studies using a live coronavirus in the 3D-printed blood vessel model, which would further confirm the results of the current study and clarify which COVID-19 patients may have a higher risk for stroke.