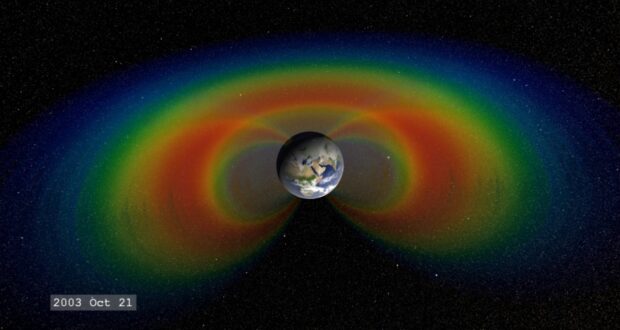 NASA’s Earth scientists who monitor the changes in magnetic strength there, both for how such changes affect Earth's atmosphere and as an indicator of what's happening to Earth's magnetic fields, deep inside the globe. Credits: NASA's Goddard Space Flight Center

What happens when weakening magnetic field creates 3 poles, instead of 2 on Earth?

NASA has taken it seriously as this unique phenomenon will finally result in weakening the earth’s magnetic field and eventually affects the protective field that shields us from solar flares, and disrupts satellite communication.

Already, over South America and the southern Atlantic Ocean, this unusually weak spot in the field – called the South Atlantic Anomaly, or SAA – allows these particles to dip closer to the surface than normal. Earth’s magnetic field acts like a protective shield around the planet, repelling and trapping charged particles or solar flares from the Sun.

Currently, the SAA has shown no visible impact on daily life on earth but some recent observations and forecasts show that the region is expanding westward and continuing to weaken in its intensity, making NASA to study the phenomenon.

The South Atlantic Anomaly is also of interest to NASA’s Earth scientists who monitor the changes in magnetic strength there, both for how such changes affect Earth’s atmosphere and as an indicator of what’s happening to Earth’s magnetic fields, deep inside the globe. Instead of two poles, what happens if the earth has many more poles or even three poles?

The future remains unimaginable but a certainty that geophysicists are wary of. See the NASA video here:

In order to understand how the SAA and to prepare for future threats to satellites, the Godard team of NASA is assessing the current state of the magnetic field using data from the European Space Agency’s Swarm constellation, previous missions from agencies around the world, and ground measurements.

The geo-dynamo models are unique in their ability to use core physics to create near-future forecasts, said Andrew Tangborn, a mathematician in Goddard’s Planetary Geodynamics Lab. “This is similar to how weather forecasts are produced, but we are working with much longer time scales,” he said. “This is the fundamental difference between what we do at Goddard and most other research groups modeling changes in Earth’s magnetic field.”

One such application is the International Geomagnetic Reference Field, or IGRF — used for a variety of research from the core to the boundaries of the atmosphere, collecting candidate models made by worldwide research teams that describe Earth’s magnetic field and track how it changes in time.

As of now, the changing SAA poses a great challenge to researchers on earth’s dynamics influence other aspects of the Earth system, by tracking this slowly evolving “dent” in the magnetic field.