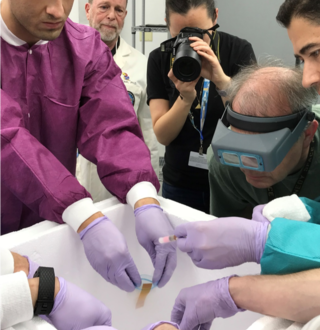 Sperm samples for the Micro-11 experiment arrived at NASA's Kennedy Space Center, in Florida, where the researchers prepared them for launch to the International Space Station. Credits: NASA

Remember when you first learned about reproduction process in health class at school? Well, NASA biologists are wondering how some of those basics of how fertilization would work if sperm and egg were to unite in space. In other words, having sex aboard on ISS and examine how the sperm squirm in weightlessness — is their plan.

Little is currently known about the biology of reproduction in space, and this experiment will begin to address that gap by measuring, for the first time, how well bull and human sperm functions in space, said NASA in a statement. Studying reproductive biology in space is useful because the unique environment of microgravity can reveal processes and connections not visible in gravity on Earth, it explained the rationale behind such step.

In mammals, including humans, fertilization occurs when a sperm cell swims toward an egg and fuses with it. Before this can happen, the sperm cell must be activated to start moving. Next, to prepare it for fusing with the egg, the sperm needs to move faster, and its cell membrane must become more fluid.

Previous experiments with sea urchin and bull sperm suggest that activating movement happens more quickly in microgravity, while the steps leading up to fusion happen more slowly, or not at all. Delays or problems at this stage could prevent fertilization from happening in space.

For this experiment, two types of mammalian sperm, human and bull, will be sent to the space station as frozen samples. Bull sperm show similar changes in movement and other markers of fertility as human sperm. However, human sperm are inherently more varied in motion and appearance. So, the measurements of bull sperm will provide quality control to ensure the researchers can detect subtle differences in sperm from both species.

The astronaut crew will thaw the samples and add chemical mixtures that trigger activation of sperm movement and preparation for fusing with an egg. Researchers will use video to assess how well the space sperm move. Finally, the samples will be mixed with preservatives and returned to Earth, where they’ll be analyzed to see whether the steps necessary for fusion occurred and whether the samples from space differ from sperm samples activated on the ground.

We don’t know yet how long-duration spaceflight affects human reproductive health, and this investigation would be the first step in understanding the potential viability of reproduction in reduced-gravity conditions.

Managed by NASA’s Ames Research Center in California’s Silicon Valley, the Micro-11’s principal investigator for the fertilization in space experiment is Joseph S. Tash of the University of Kansas Medical Center in Kansas City. The experimental hardware for Micro-11 was developed by BioServe Space Technologies at the University of Colorado Boulder, and will launch aboard SpaceX’s 14th cargo resupply services mission to the International Space Station for NASA.