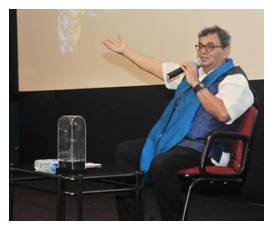 After unveiling the special edition of FTII Academic Journal ‘Lensight’ at IFFI Goa 2017 on day two (21st November, 2017), Showman of Hindi cinema Subhash Ghai enthralled the film aspirants and students at the masterclass doling out valuable advice to them on honouring their craft and making a mark in their respective fields at IFFI Goa 2017.

The veteran filmmaker had the audience in splits during the heart-to-heart conversation at the masterclass discussing his struggle as a filmmaker, facing failure and revealed interesting anecdotes that went into the making of his musical blockbusters including Kalicharan, Vidhata, Khalnayak and Karma among several other subjects.

Starting the conversation with ‘what next’, the filmmaker touched upon several topics related to his personal and professional life that inspired everybody present at the auditorium. From selling 6 stories to top producers in one year to making Saudagar in 11 months despite controversies on the rift between Dilip Kumar and Rajkumar to stating the fact that 2017 has not been a fruitful year for Hindi cinema, Subhash Ghai’s conversation with the crowd was quite a revelation.

The filmmaker has been a regular at IFFI Goa in the past offering his valuable contribution to the festival organisers. 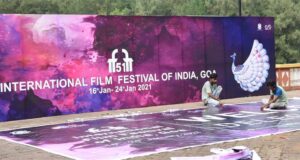 International Film Festival of India (IFFI-2021) kicks off in Goa