President Pranab Mukherjee and Prime Minister Narendra Modi have condoled the passing away of Naresh Chandra, former civil servant and served as ambassador to the US.

In a message to his niece Mrs. Vatsala Kumar, the President said, “I am sad to learn about the demise of Shri Naresh Chandra. As an outstanding IAS officer, Shri Chandra served the nation in various capacities including Cabinet Secretary, Government of India, Governor of Gujarat and Ambassador of India to the United States of America.” 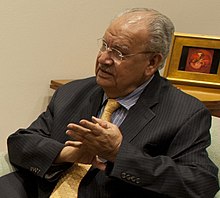 Naresh Chandra was awarded ‘Padma Vibhushan’ in 2007, noted the President and remembered his valuable services to the nation in various capacities, which he said would always be remembered. “Please accept my heartfelt condolences and convey the same to the members of your family. May you all have the strength to bear this irreparable loss with courage and fortitude,” said the President.

Prime Minister Modi said, “Shri Naresh Chandra was an outstanding public servant, who left an indelible mark on matters of governance and policy. Pained by his demise. I remember an insightful discussion with Naresh Ji, who as USA ambassador invited me for dinner. He believed in strong India-USA friendship.”

As Indian ambassador to the US, he will always be remembered for the establishment of Gandhi Memorial – Mahatma Gandhi’s statue – in front of Indian Chancery building in Washington DC, which was accomplished against heavy odds on 16 September 2000. He described it as a great moment – for South Asians and Americans. “I also received many messages from our friends in Pakistan – and the Pakistan Ambassador congratulated me and expressed her happiness at the establishment of the statue,” he once said.

He was instrumental in managing President Bill Clinton’s visit to India that paved the way for increased exchange of visits and relations between the two countries.