When Indira Gandhi was insulted in the Lok Sabha in 1978, then Janata Dal did not realize that the person would return to power soon and that history repeats itself. On Friday, BJP-led UP government ignored this rule when its police turned violent against Priyanka Gandhi to stop her forcibly, allegedly manhandling her in a bid to stop her from visiting a retired IPS officer and an anti-CAA activist.

Priyanka Gandhi has alleged that she was manhandled by Uttar Pradesh Police personnel who grabbed her by her throat and pushed her when she tried to go to the house of retired IPS officer SR Darapuri on Saturday evening. Darapuri has been arrested in connection with the recent protests over the Citizenship (Amendment) Act (CAA). 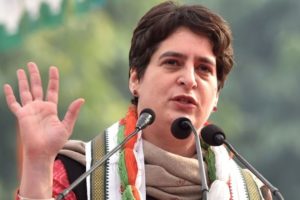 However, Priyanka Gandhi resisted the police and rode pillion on a scooter and reached the Indiranagar (sector-18) residence of Darapuri. Uttar Pradesh Congress spokesperson Ashok Singh told PTI that the Congress general secretary was stopped at the Lohia crossing and then she got down from her vehicle and started walking. Later, she got into her vehicle after a kilometre but again stopped in the Munshipulia area. She almost walked three kilometres to reach the residence of Darapuri.

After meeting Darapuri’s family members, Priyanka Gandhi said, “They do not have the right to stop me. If they want to arrest me, they should do so.” Uttar Pradesh Congress chief Ajay Kumar Lallu said, “This (UP) government is feeling scared of Priyankaji. Hence, she was stopped.”

However, UP Policewoman Archana Singh, who was blamed for the shocking episode later told higher officials in her report that she was heckled for stopping Priyanka Gandhi for deviating her route. She denied that she had manhandled Priyanka Gandhi but was performing her duty as fleet-in-charge officer.

The episode has now reached the National Human Rights Commission (NHRC), which may probe if not happy with the police version.