Suma-hosted “Pelli Choopulu” TV show on Maa TV kicked off on Sunday with well-known anchor Pradeep Machiraju receiving 14 participants who are in the show to become his real life partner.

The participants included Divya from Machalipattanam and currently working in Vijayawada. She told Pradeep that his unique style of talking is impressive. Next contestant Neha Ajmal is a software engineer working in Malaysia. She tasked him to find how to say “I love you” in Malayan language. Next one is Ramya Krishna from Vijayawada, who said she admired him for his sense of humour and respect for women.

Love gets disturbed when possessiveness falls in place #PelliChoopulu Tonight at 9:30 PM on @StarMaa pic.twitter.com/Z7NkwKov7N

Shreya, the fourth contestant is from Hyderabad, whose family is into Khadhi handlooms. Sahiti is the fifth contestant who came with a box of cards mentioning 101 reasons why she loves Pradeep Manchiraju. She is followed by Yashmi Kanakala, an MBA student who wished to return from the show changing her name to Yashmi Machiraju.

Rithu Shekhar, the next contestant, asked Pradeep to look into her eyes for five seconds, which he duly did. Then she declared her “love at first sight.” Being a student of journalism, she just concluded that he is very “impressive.”

It was the eighth contestant Deena, a Malayali girl from Dubai, who stole the show and triggered rancour among other contestants. She said she had fought with her parents and left her job with a logistics company to come to the show.

Monika from Kadapa presented him his childhood photo and said it was a unique nature that he should not give up. She made him PM or Pradeep Machiraju, but quickly added that it would be Pradeep and Monika, going forward.

Pradeep faced a shock of the entire show when not a contestant but her mother entered first and introduced herself as Latha and announced that her daughter Dayana is visiting him soon. She declared that she is handing her over to him. Dayana from Anantapur entered sooner than expected and presented him a lamp as the gift, since his name has deep in it. He then lighted the lamp duly.

Too much Love & Excitement with Loads of Entertainment!!! #PelliChoopulu Monday-Friday at 9:30 PM on @StarMaa pic.twitter.com/ctvi4hgi4A

Chandrakala, the 11th contestant is from Bangalore, who is working as academic councilor. Then came Divya, a non-Telugu but she had apparently learnt Telugu to speak to him. Hailing from Nagpur, she has been staying in Hyderabad for over seven years. She gifted him a painting of Krishna, done by herself.

Shabina, the next contestant expressed her admiration for him and gifted him a miniature of glassy Taj Mahal showcasing her love for him. Manushri is the last contestant, who gifted him goggles. 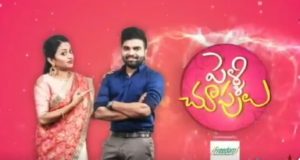