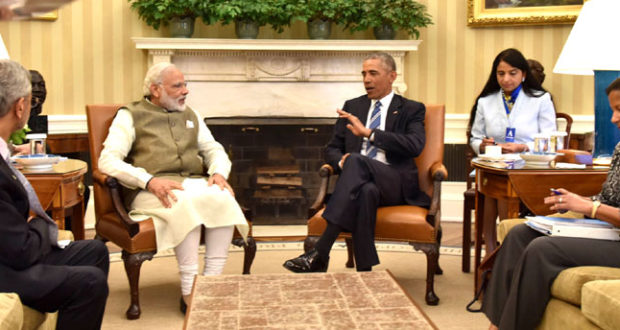 Indian Prime Minister Narendra Modi, who received a telephone call from US President, Mr Barack Obama on Wednesday evening, thanked him for his ooperation.

The two leaders reviewed with satisfaction the significant all round progress and cooperation in ties between India and the US in the past few years.

Prime Minister Modi also thanked President Obama for his strong support and contribution to strengthening the strategic partnership between India and the US.

President Obama visited India twice during his term and he was also the Chief Guest at 2015 Republic Day Parade.

There is a hotline or secure line of communication between Prime Minister Narendra Modi and US President Barack Obama and their national security advisors, a decision that was made after Obamas’s historic visit to New Delhi in January 2015.

“Hotline has connotation of some crisis management phone or system that was used during the cold war to defuse crisis. That’s not what we have,” Lavoy explained.

During Obama’s term, India became only the fourth country– after Russia, Great Britain and China – with which the US has a hotline.

For India this is the first hotline at the level of head of state. The hotline also signified efforts of Obama and Modi to increase the frequency of level of communication and frequent discussion between them on key bilateral, regional and global issues.