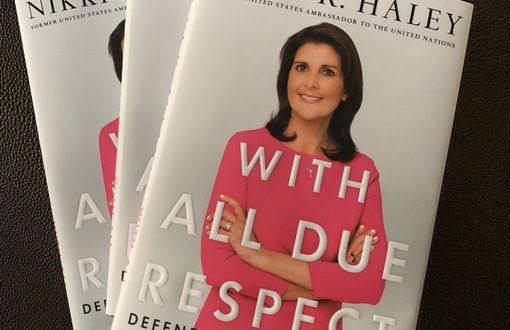 Nikki Haley gets Trump’s support for nailing down Kelly, Tillerson in memoir

Former US Ambassador to UN Nikki Haley has finally cracked the code from within narrating in her book how former Secretary of State Rex Tillerson and former White House Chief of Staff John Kelly had tried to circumvent some policies in the name of national interest despite going against President Donald Trump’s own decisions.

Haley’s claims in her book With All Due Respect come at a time when US Presidnet Trump is facing the House impeachment inquiry over his policy on Ukraine. She said former secretary of state Rex Tillerson and former White House chief of staff John F. Kelly tried to persuade her to work around and dump Trump that she claimed to have refused. “Kelly and Tillerson confided in me that when they resisted the president, they weren’t being insubordinate, they were trying to save the country,” she wrote.

Interestingly, they argued the same way many witnesses of Democrats did when they testifed in private before the House Intelligence Committee. Haley told CBS Sunday Morning show that she did not believe the president had done anything wrong in the Ukrainian phone call.

She said that she was “shocked” at the request made during their closed-door meeting. “It was their decisions, not the president’s, that were in the best interests of America, they said. The president didn’t know what he was doing,” she wrote in her book. She recalled Tillerson reasoning her out that he resisted the president’s decisions because, “if he didn’t, people would die.”

It may be mentioned here that President Trump fired Tillerson in March, 2018, who later called the President “dumb as rock”, while John Kelly resigned in December, 2018. In fact, Haley received thumbs up from the President when he tweeted “Good luck Nikki!”

.@NikkiHaley is out with a new book, “With All Due Respect” this week. Make sure you order your copy today, or stop by one of her book tour stops to get a copy and say hello. Good luck Nikki! https://t.co/uHKAAlVuLt