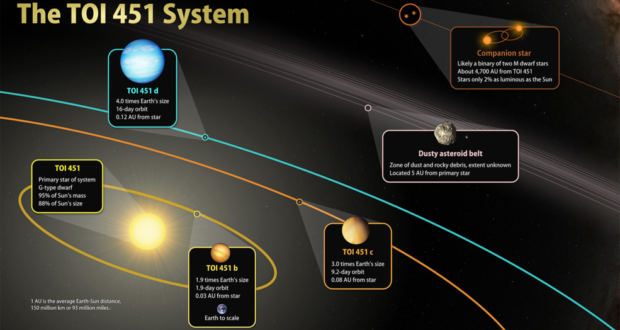 This illustration sketches out the main features of TOI 451, a triple-planet system located 400 light-years away in the constellation Eridanus. Credit: NASA’s Goddard Space Flight Center

Using observations from NASA’s Transiting Exoplanet Survey Satellite (TESS), an international team of astronomers has discovered a trio of hot worlds larger than Earth orbiting a much younger version of our Sun called TOI 451. The system resides in the recently discovered Pisces-Eridanus stream, a collection of stars less than 3% the age of our solar system that stretches across one-third of the sky.

The planets were discovered in TESS images taken between October and December 2018. Follow-up studies of TOI 451 and its planets included observations made in 2019 and 2020 using NASA’s Spitzer Space Telescope, which has since been retired, as well as many ground-based facilities.

Archival infrared data from NASA’s Near-Earth Object Wide-Field Infrared Survey Explorer (NEOWISE) satellite – collected between 2009 and 2011 under its previous moniker, WISE – suggests the system retains a cool disk of dust and rocky debris. Other observations show that TOI 451 likely has two distant stellar companions circling each other far beyond the planets.

A paper reporting the findings was published on Jan. 14 in The Astronomical Journal. Stellar streams form when the gravity of our Milky Way galaxy tears apart star clusters or dwarf galaxies. The individual stars move out along the cluster’s original orbit, forming an elongated group that gradually disperses.

Elisabeth Newton, an assistant professor of physics and astronomy at Dartmouth College in Hanover, New Hampshire, who led the research, said: “It’s only 120 million years old and just 400 light-years away, allowing detailed observations of this young planetary system. And because there are three planets between two and four times Earth’s size, they make especially promising targets for testing theories about how planetary atmospheres evolve.” 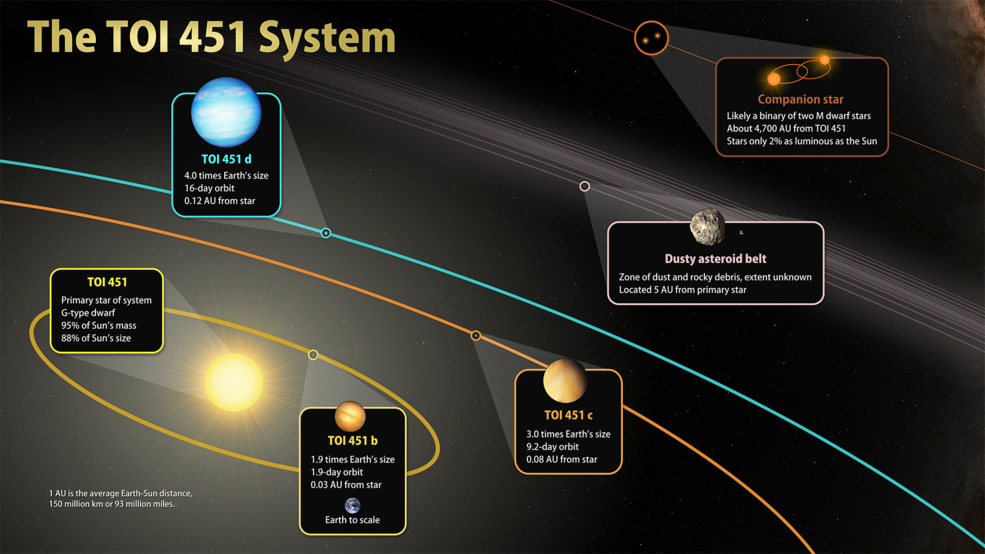 This illustration sketches out the main features of TOI 451, a triple-planet system located 400 light-years away in the constellation Eridanus. Credit: NASA’s Goddard Space Flight Center

In 2019, a team led by Stefan Meingast at the University of Vienna used data from the European Space Agency’s Gaia mission to discover the Pisces-Eridanus stream, named for the constellations containing the greatest concentrations of stars. Stretching across 14 constellations, the stream is about 1,300 light-years long. However, the age initially determined for the stream was much older than we now think.

Astronomers expect planets as big as these to retain much of their atmospheres despite the intense heat from their nearby star. Different theories of how atmospheres evolve by the time a planetary system reaches TOI 451’s age predict a wide range of properties.

“By measuring starlight penetrating a planet’s atmosphere at different wavelengths, we can infer its chemical composition and the presence of clouds or high-altitude hazes,” said Elisa Quintana, an astrophysicist at NASA’s Goddard Space Flight Center in Greenbelt, Maryland. “TOI 451’s planets offer excellent targets for such studies with Hubble and the upcoming James Webb Space Telescope.”