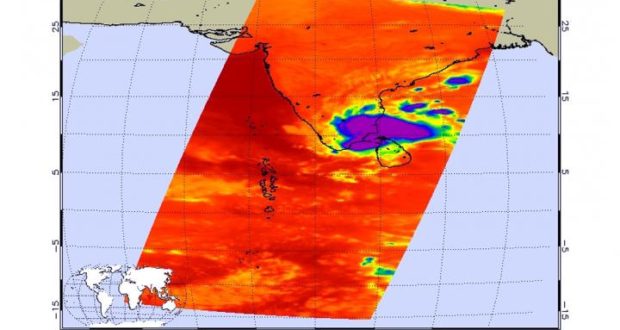 Caught in the act of landfall, Tropical Cyclone Gaja was seen by NASA’s Aqua satellite as it passed overhead and collected temperature information.

The Atmospheric Infrared Sounder or AIRS instrument aboard NASA’s Aqua satellite passed over Tropical Cyclone Gaja on Nov. 15 at 3:29 p.m. EDT (2029 UTC) and analyzed the storm in infrared light. Infrared light provides temperature data and that’s important when trying to understand how strong storms can be. The higher the cloud tops, the colder and the stronger they are.

When Aqua passed over the Indian Ocean, Gaja’s center was making landfall along the coast of southeastern India. The AIRS instrument found coldest cloud top temperatures in thunderstorms around the center, where temperatures were as cold as minus 63 degrees Fahrenheit (minus 53 degrees Celsius). Storms with cloud top temperatures that cold have the capability to produce heavy rainfall.

At 10 a.m. EST (1500 UTC), the center of Tropical Cyclone Gaja was located near latitude 9.7 degrees north and longitude 75.9 degrees west. Gaja was moving toward west-southwest. Maximum sustained winds are near 46 mph (40 knots/74 kph) with higher gusts.

Gaja was exiting the southwestern coast of India on Nov. 16 at 7 a.m. EST (1200 UTC) and was moving into the Arabian Sea where it is expected to maintain strength and travel in a westerly direction over the next several days.