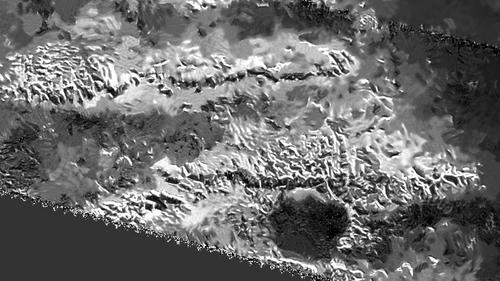 This radar view was obtained on May 12, 2008 by the Cassini-Huygens mission is a cooperative project of NASA, ESA. Credit: NASA/JPL-Caltech/ASI

The mountainous ridges called the Mithrim Montes showed three series of mountain ridges and the top measured 10,948 feet in height. Most of these mountain ridges are located near the equator. The region is called Xanadu.

The mountainous cliffs point at the evolution of a planet where forces have shoved the surface upward from underneath. Earth too has similar mountains and cliffs and the tallest mountain Everest is one such star example. The Himalaya and Andes Mountains still manifest such forces of nature underneath.

Cassini has found that Titan also has rain and rivers and some active tectonic forces causing quakes. Titan’s rotation, tidal forces from Saturn or cooling of the crust are some of its natural effects tied to this phenomenon.

Since its arrival in 2004, Cassini’s observations have changed whole dimension of saturn and its largest moon Titan. It has revealed that Titan’s surface is shaped by rivers and lakes of liquid ethane and methane, which forms clouds and causes occasional rains from the sky as water does on Earth. Winds sculpt vast regions of dark, hydrocarbon-rich dunes that girdle the moon’s equator and low latitudes, while volcanoes erupt spewing liquid water as the lava.

On its journey to Saturn, Cassini carried the European-built Huygens probe, which landed on Jan. 14, 2005, becoming humankind’s first landing on a body in the Outer Solar System when it parachuted through Titan’s murky skies. Currently, scientists are eager to get new data that could confirm the presence of a liquid ocean beneath the Titan’s surface.

Radar images do not present scenes as they would appear to human eyes but use radio waves beamed by the spacecraft that are reflected and scattered off of Titan’s surface in order to see through Titan’s opaque atmosphere. Bright regions indicate materials that are rough or that otherwise scatter the beam; dark regions indicate materials that are relatively smooth or that otherwise absorb radar waves. A side effect of this technique is the grainy pattern called “speckle” that typically is present in Cassini radar images.

This view was produced using a technique for handling noise in Cassini radar images, called despeckling, that produces clearer, easier-to-interpret views. Titan’s icy crust sits atop a deep ocean of liquid water that probably acts much like Earth’s upper mantle — the layer of hot, high-pressure rock below the crust that can slowly flow and deform over time.

This radar view was obtained on May 12, 2008 taken from a location at 2 degrees south latitude, 127 degrees west longitude. The incidence angle is about 34 degrees.

The Cassini-Huygens mission is a cooperative project of NASA, the European Space Agency and the Italian Space Agency. NASA’s Jet Propulsion Laboratory, a division of the California Institute of Technology in Pasadena, manages the mission for NASA’s Science Mission Directorate, Washington.