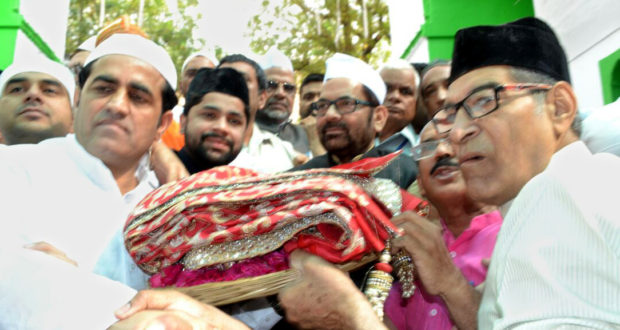 In his message, Prime Minister Narendra Modi conveyed greetings and best wishes to followers of Khwaja Moinuddin Chishti in India and abroad on the occasion of 806th annual Urs.

He  said, “It is said about India that it is not told in words but it should be felt. Peace, unity and harmony is at core of various philosophies in the country, Sufism is also one of them. When we talk of Sufi Saints in India, Khwaja Moinuddin Chishti appears as a symbol of great spiritual traditions. The service of humanity made by ‘Gharib Nawaz’ will continue to be an inspiration for future generations.”

Prime Minister said, “On the occasion of the annual Urs of this great saint, I am offering “Chadar” and Khiraaj-E-Aqueedat (homage) to Dargah Ajmer Sharif and wish for a harmonious co-existence of our culture. Greetings and best wishes to the followers of Khawaja Moinuddin Chishti across the world on the annual Urs.”

On the occasion, Naqvi said that terrorism is the biggest enemy of both Islam and entire humanity. This message is at the core of principles and teachings of great Sufi Saint Khwaja Moinuddin Chishti. Principles and commitment of Khwaja Gharib Nawaz is a strong weapon to defeat those evil elements who are trying to weaken human values and disturb peace and prosperity of the world.

Naqvi said that India is an example of social and communal harmony for the entire world. “We will have to strengthen this fabric of social harmony and unity,” he said. “The life of Gharib Nawaz inspires us to strengthen the commitment to communal and social harmony. This unity can defeat the forces, who are engaged in the conspiracy to create divide and conflict in the society.”

Naqvi also inaugurated 100 toilets complex, constructed by Ministry of Minority Affairs at “Vishramsthali”, Kayad near the Dargah. Zaireen, coming in large number at Dargah, will be benefitted from the facility. Naqvi also took stock of various ongoing development works related to Ajmer Dargah with the officials. 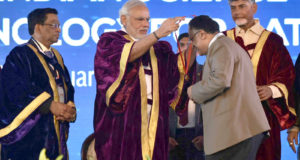