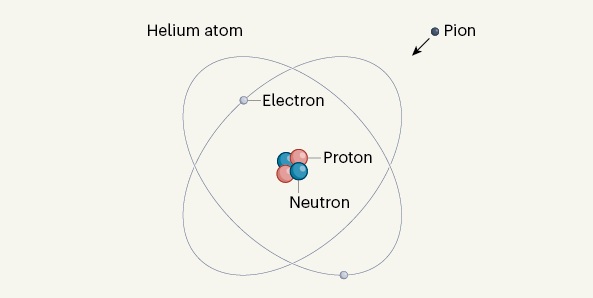 A helium atom in which one of the two electrons has been replaced by a negative pion gives out a composite particle made of one quark and one antiquark. Exotic atoms can help physicists to make exquisitely precise measurements of the fundamental constants of nature, such as the size of the proton.

Pionic helium is the latest addition to a zoo of exotic atoms, including positronium, muonium, muonic hydrogen, muonic deuterium and antihydrogen. No dilithium crystals yet, though. Pionic helium could provide a direct measurement of the mass of a related fundamental particle, the neutrino. That has been estimated indirectly, says physicist Masaki Hori, but “it is always nice to have a direct laboratory determination”.

Exotic atoms are those in which one or more of the constituents of normal atoms have been replaced by an exotic particle, such as an antimatter particle. These atoms can then be probed to search for any tiny discrepancies in their properties from those predicted by models using techniques that underpin the world’s most accurate timekeepers, atomic clocks — and thereby opening a window on the foundations of physics.

Pions were discovered7 by Cecil Powell and co-workers in 1947, but their existence was first predicted in 1935 by Hideki Yukawa. They belong to the family of subatomic particles known as mesons, which are made up of a quark and an antiquark. Quarks are the particles that make up protons and neutrons.

Pions are short-lived particles that come in positively charged, negatively charged and neutral varieties and the team amanged to produce negatively charged pions with a lifetime of only 26 nanoseconds when isolated. It is thus no small feat that the experiment not only succeeded in replacing an electron in helium atoms with a pion, but also observed the resulting exotic atom undergo a quantum transition.

Hori and colleagues’ work now opens up a whole new experimental system for further exploration. If some challenges can be overcome, such exploration might enable the accuracy of the mass of the negative pion to be improved by a factor of 10–100, for instance; currently, this mass is known to only six decimal places.