Doordarshan, India’s National Broadcaster, started LIVE STREAM of the 72nd Independence Day Celebrations from the ramparts of the historic Red Fort – on its official channel on YouTube. www.youtube/DoordarshanNational from 6:25 am onward.

The Prime Minister, Shri Narendra Modi paying floral tributes at the Samadhi of Mahatma Gandhi, at Rajghat, on the occasion of 72nd Independence Day, in Delhi on August 15, 2018.(PIB)

The day began with Prime Minister Modi visiting the Rajghat, the memorial of Mahatma Gandhi where he offered floral tribute to the Father of the Nation. From there the PM convoy moved to the Red Fort after army salutations and other customary events.

In his fifth speech from the Red Fort, PM Modi pondered the achievements of the NDA government saying the development has fast-tracked in the last four years. “India is moving with a new zeal and therefore today India is constructing twice the highways and producing record crops and manufacturing record number of mobile phones”, Modi said.

On social issues, he vowed again to make India open-defecation-free, electrification, implementation of Goods and Service Tax and LPG connection in rural and urban areas.

He is likely to announce his health policy–National Health Protection Scheme or Aayushman Bharat, officially today.

Here are some visuals from the Red Fort: 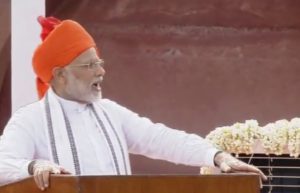 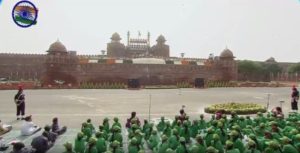