How can a galaxy be there without dark matter? The galaxy NGC 1052-DF2 challenges currently-known theories of galaxy formation as it negates everything we know about nature of dark matter.

Since 1884 astronomers have invoked dark matter to explain why galaxies do not fly apart, given the speed at which they move within galaxies. From Kepler’s Second Law it is expected that the rotation velocities of stars will decrease with distance from the centre of a galaxy. This is not observed in NGC 1052-DF2, which resides about 65 million light-years away in the NGC 1052 Group, which is dominated by a massive elliptical galaxy called NGC 1052.

This large, fuzzy-looking galaxy is so diffuse that astronomers can clearly see distant galaxies behind it. This ghostly galaxy is not well-formed. It does not look like a typical spiral galaxy, but it does not look like an elliptical galaxy either. Based on the colours of its globular clusters, the galaxy is about 10 billion years old. However, even the globular clusters are strange: they are twice as large as typical groups of stars.

All of these oddities pale in comparison to the weirdest aspect of this galaxy: NGC 1052-DF2 is missing most, if not all, of its dark matter. The galaxy contains only a tiny fraction of dark matter that astronomers would expect for a galaxy this size. But how it formed is a complete mystery.

"I spent an hour just staring at this image," said lead researcher Pieter van Dokkum of Yale University. "This thing is astonishing: a gigantic blob so sparse that you see the galaxies behind it. It is literally a see-through galaxy."

This discovery makes all the current theories on the distribution of dark matter and its influence on galaxy formation redundant or partly false. "There is no theory that predicts these types of galaxies — how you actually go about forming one of these things is completely unknown," says co-author Allison Merritt from Yale University.

However, the discovery of NGC 1052-DF2 demonstrates that dark matter is somehow separable from galaxies. This is only expected if dark matter is bound to ordinary matter through nothing but gravity. Now researchers are pondering possible explanations for this missing dark matter in NGC 1052-DF2.

Did a cataclysmic event such as the birth of a multitude of massive stars sweep out all the gas and dark matter? Or did the growth of the nearby massive elliptical galaxy NGC 1052 billions of years ago play a role in NGC 1052-DF2’s dark matter deficiency? These ideas, however, still do not explain how this galaxy formed. 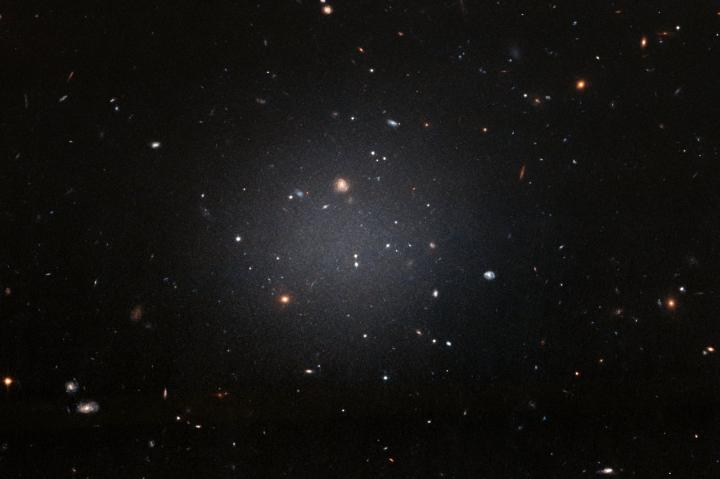 NGC 1052-DF2 is missing its dark matter. The galaxy contains only a tiny fraction of dark matter that astronomers would expect for a galaxy this size. But how it formed is a complete mystery.
Credit: NASA, ESA, and P. van Dokkum (Yale University)