Festival of India to be Held in Ghana

Indian mission in Ghana will hold a Festival of India in four cities of Ghana from January 25 to March 16, 2017 as part of bilateral knowledge share initiative.

The activities of the Festival include amalgamation of Indian classical dances, Sufi & Folk Music, and Saptarang – confluence of seven classical dance forms culminating in Vande Matram.

To complete the experience, a Food Festival, Yoga and Meditation, Film Festival will also be organised during the Festival.

The Festival events will be held in four cities of Accra, Kumasi, Cape Coast, Takoradi in Ghana. Earlier, similar festival was held in February in South Africa last year with several classical dancers performing on February 18, 2016.

In Cambodia too, a similar Festival of India was held this month to commemorate the relations between the two Asian countries reflecting both the ancient Buddhist period and present era.

These festivals are organised by the MInistry of Culture in collaboration with the Ministry of External Affairs and the Indian missions abroad. 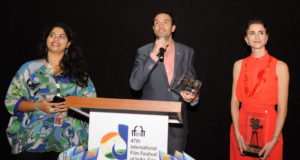 Festival of India to be Held in Netherlands on Jan 26, 27