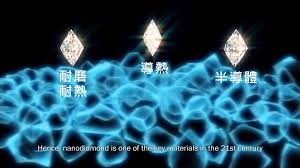 The study, “Ice-VII inclusions in Diamonds: Evidence for aqueous fluid in Earth’s deep Mantle,” was published  in the journal Science. For his study, Tschauner used diamonds found in China, the Republic of South Africa, and Botswana that surged up from inside Earth. “This shows that this is a global phenomenon,” the professor said.

Scientists theorize the diamonds used in the study, were born in the mantle under temperatures reaching more than 1,000-degrees Fahrenheit. The mantle – which makes up more than 80 percent of the Earth’s volume – is made of silicate minerals containing iron, aluminum, and calcium among others.

And now we can add water to the list.

The discovery of Ice-VII in the diamonds is the first known natural occurrence of the aqueous fluid from the deep mantle. Ice-VII had been found in prior lab testing of materials under intense pressure. Tschauner also found that while under the confines of hardened diamonds found on the surface of the planet, Ice-VII is solid. But in the mantel, it is liquid.

“These discoveries are important in understanding that water-rich regions in the Earth’s interior can play a role in the global water budget and the movement of heat-generating radioactive elements,” Tschauner said. This discovery can help scientists create new, more accurate models of what’s going on inside the Earth, specifically how and where heat is generated under the Earth’s crust.

In other words: “It’s another piece of the puzzle in understanding how our planet works,” Tschauner said.Of course, as it often goes with discoveries, this one was found by accident, explained Tschauner. “We were looking for carbon dioxide,” he said. “We’re still looking for it, actually,”