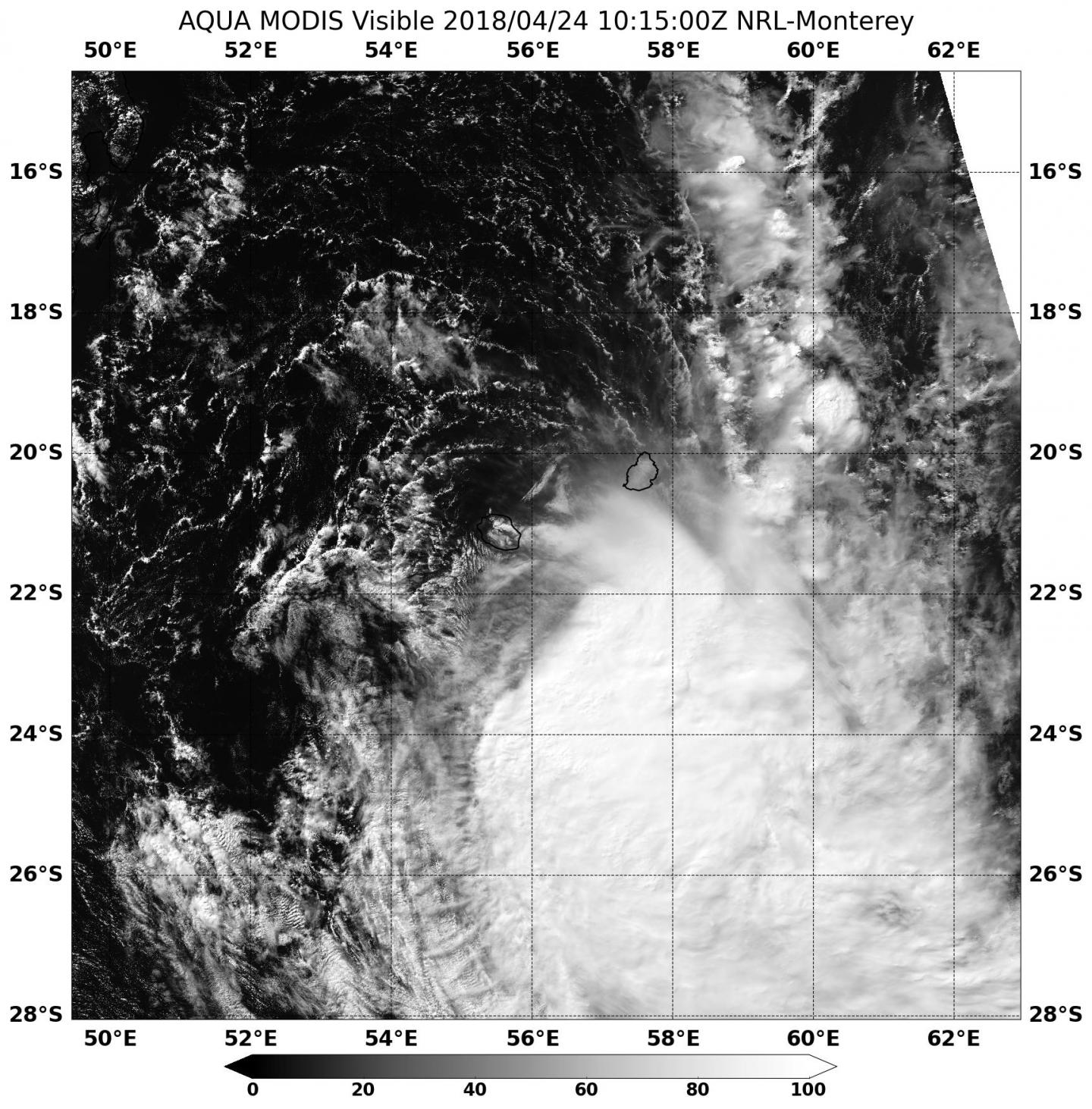 From the image taken at the location is approximately 162 nautical miles south of Port Louis, Mauritius, cyclone Fakir was seen moving to the south-southeast at 18 knots (20.7 mph/33.3 kph). Maximum sustained surface winds were estimated at 60 knots (69 mph /111 kph).

The Moderate Resolution Imaging Spectroradiometer or MODIS instrument aboard NASA’s Aqua satellite has captured a visible image of Fakir that showed a rapidly disintegrated system.

The image showed the cyclone elongated as the bulk of clouds and thunderstorms were being pushed to the southeast of the center, in an area of high vertical wind shear between 40 and 50 knots (46 to 57 mph/74 to 92 kph).

JTWC warned that “[Fakir] is forecast to continue deteriorating due to the severe vertical wind shear associated with the trough (elongated area of low pressure) approaching from the west and cooling sea surface temperatures along its forecast track to the southeast. The unfavorable environment will lead to dissipation by Thursday, April 26.”

The southwest Indian Ocean cyclone season that started on November 15, 2017 will last until April 30, 2018 and the major cyclone Fakir formed on Monday, April 23 near northeastern Madagascar as captured by the Global Precipitation Measurement mission or GPM core satellite looked at the storm’s rainfall rates. 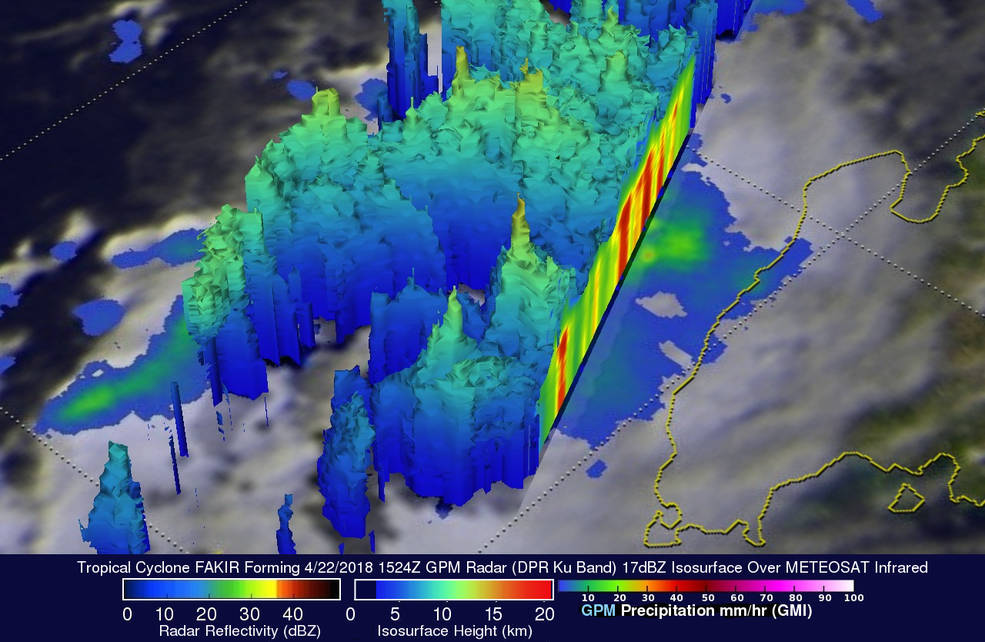 On April 22, GPM showed that bands of extremely heavy rainfall were spiraling into the tropical low’s southeastern side. GPM’s radar (DPR Ku Band) showed that precipitation was falling at a rate of over 219 mm (8.6 inches) per hour in some of the strong convective storms that were moving toward Madagascar. GPM’s radar indicated that a few of the tallest intense convective storms were reaching heights of almost 16 km (9.9 miles).
Credits: NASA/JAXA, Hal Pierce

Fakir is expected to intensify as it moves toward the southeast and could be a significant tropical cyclone on Wednesday. Fakir will add woes to an already battered Madagascar by tropical cyclones Ava, Dumazile, and Eliakim.

The GPM core observatory satellite flew above the forming cyclone near northeastern Madagascar on April 22, 2018 and its Microwave Imager (GMI) and Dual Frequency Precipitation Radar (DPR) instruments revealed the locations of heavy rainfall linked with the forming Fakir cyclone.

GPM showed that bands of extremely heavy rainfall were spiraling into the southeastern side, precipitation was falling at a rate of over 219 mm (8.6 inches) per hour in some of the strong convective storms, seen moving toward Madagascar.

GPM’s radar indicated some convective storms were reaching heights of almost 16 km (9.9 miles). On April 23, 2018 at 11 a.m. EDT, Fakir had maximum sustained winds near 40 knots (46 mph/74 kph). Fakir was centered near 6.5 degrees south latitude and 53.2 east longitude, about 313 nautical miles north-northwest of St Denis, la Reunion and seen moving southeastward to hit the Indian coast. The system is expected to peak in strength in one day, April 24.