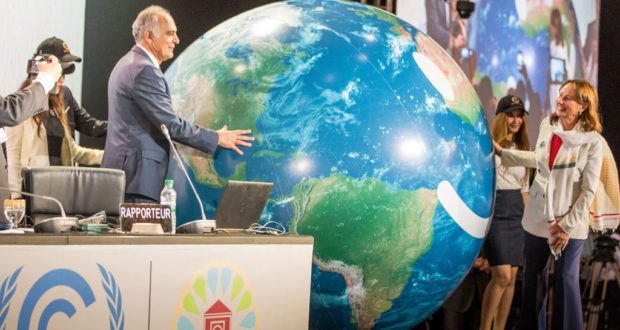 MARRAKECH: ‘The eyes of the world are upon us,’ chair of UN (UN)Conference says as new round of climate talks opens

In a new report analyzing the global climate between 2011-2015, the World Meteorological Organization – the United Nations system’s weather agency – found an increasingly visible human footprint on extreme weather and climate events with dangerous and costly impacts.

The extreme weather also meant that people around the world suffered from high-impact climate events such as severe droughts in Africa, devastating floods in South-East Asia, terrible heatwaves in India and Pakistan, and catastrophic hurricanes and typhoons in the United States and the Philippines.

Against this backdrop, and within the context of the ongoing 22nd Conference of the Parties (COP22) to the UN Framework Convention on Climate Change (UNFCCC), in Marrakech, Morocco (07-18 November 2016), the United Nations News Centre spoke with Petteri Taalas, Secretary-General of World Meteorological Organization (WMO), on the state of the Earth’s weather and what it means to the people who inhabit the planet.

UN News Centre: The global climate report 2011-2015 confirms that the average global temperature in 2015 has already reached the 1 degree Celsius mark. What does this 1 degree Celsius really mean to people on the ground, say for an office worker in South-East Asia or a farmer in South Africa?

Petteri Taalas: One degree does not sound like a big number if you compare the temperate over a couple of days but globally [over a long period of time] it means that we have seen an increase in the amount of disasters related to the weather. It means that we have observed more heat waves, for example, in Kuwait, the temperature hit 54 degrees Celsius limit last summer and there have been devastating heat waves in many continents.

We have also seen changes in the pattern of rainfall, which means that some areas are now seeing flooding – when it rains, it rains much more — and that led to problems for human beings and also for economies. And then in some parts of the world we have seen more droughts, caused by the heat waves, and leading to forest fires and difficulties in agriculture. For example, at the moment, the southern part of Africa is suffering because of a drought that was partly caused by El Nino last year but also by a drying trend behind it. In tropical zones we have observed more intense tropical storms and they have been devastating for countries like Vanuatu. We also observed the first hurricane hitting Cabo Verde on the African coast.

So this one degree change means that the amount of disasters related to weather and hydrology have been increasing and if it goes beyond that one degree limit – which seems to be the case according to this year’s observations – we can expect to see more of these kind of disasters. And it will have a negative impact on the economies of the countries, and it will also impact the lives and wellbeing of all humans.

26 July 2016 – The World Meteorological Organization (WMO), a United Nations specialized agency, will set up a committee to examine whether a 54 degrees Celsius temperature recently recorded in Kuwait, has set the new highest temperature for Asia, as well as for the entire Eastern hemisphere.

18 October 2011 – The United Nations voiced deep concern over the devastating floods in Thailand, Cambodia and Viet Nam and offered to assist the affected countries to respond to the disaster that has claimed hundreds of lives and caused heavy damage to property and infrastructure.

UN News Centre: What has caused this dramatic change in temperatures?

UN News Centre: Earlier WMO had said that this 1 degree rise – already halfway to the 2 degree threshold ­– and that the national climate change plans adopted so far may not be enough to prevent even a 3 degree rise. Do you think this is something that could have been foreseen before the Paris agreement?

Petteri Taalas: In our field we have known about this problem for 30 years. So about 30 years ago, we established the Intergovernmental Panel on Climate Change (IPCC), and then years later we established the United Nations Framework Convention on Climate Change (UNFCCC) to start mitigating climate change. So this problem has been around for a long time, but the good news is that governments now understand the need to mitigate climate change, and that’s why they adopted the Paris Agreement on climate change last year, and it has very recently entered into force. This gives us a good basis for moving forward, and to mitigate the effects of climate change. And the key issue is whether we are acting quickly enough to avoid a 1.5 or 2 degree warming or are we going to go beyond that. So far the pledges behind the Paris Agreement indicate about a 3 degree warming level, which would mean that we might have a larger amount of disasters related to the weather. So it would be a smart thing for the governments to start reducing the emissions, and that would also be good for the coming generations.

There is optimism in the fight against climate change, but the best time to act is now, according to Petteri Taalas, Secretary-General of the World Meteorological Organization (WMO). The head of the UN weather agency was speaking to UN News Centre, shortly after releasing a report on global greenhouse gases and climate change, which categorised 2011 to 2015 as the hottest five-year period on record. Mr. Taalas also noted that the world is now better equipped with technologies to mitigate the levels of greenhouse gas emissions and their impact on the global climate.

UN News Centre: In this context, what other messages would you like to give to the leaders attending the COP22 in Morocco?

Petteri Taalas: I would like to thank them for ratifying the Paris Agreement, which gives us hope. And we also now have better technological means for mitigation. And those means are also cheaper than they used to be. For example, solar and wind energy sources are cheaper than they used to be ten years ago. And we also have possibilities to convert our transport systems to use more electric cars. In the case of diet, we can go to more vegetarian diet; which could also reduce emissions.

So we have all the means available, and now it’s time to act and prevent these negative impacts of climate change, and it’s important that we start acting very soon, because if we wait, the problem will become more severe. I am very optimistic that we have all the means to be successful, but we should start changing our behavior very soon.

MARRAKECH: ‘The eyes of the world are upon us,’ chair of UN Conference says as new round of climate talks opens

7 November 2016 – The United Nations Climate Change Conference, known as ‘COP 22,’ opened today in Marrakech, Morocco, just days after the entry into force of the landmark Paris Agreement which has now been ratified by 100 countries.

UN News Centre: What is something that society, as a whole, can do to mitigate these impacts?

Petteri Taalas: All normal consumers now have big powers – they can decide what kind of sources of energy they use in their houses, what kind of means of transport they use, and what kind of diet they are eating. For example, a vegetarian diet is better for climate than a meat-based diet. Consumers have big power here and if they decide to go to these low emission solutions, they are the ones who have power to do that. And also the policy-makers are watching very closely what the opinion of the ordinary people is, and I believe that they are able to change the consumption behaviour in the coming years. 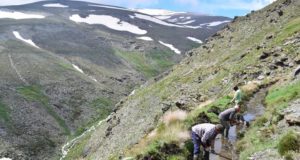 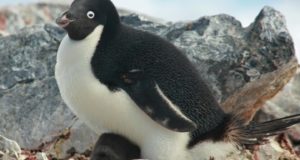