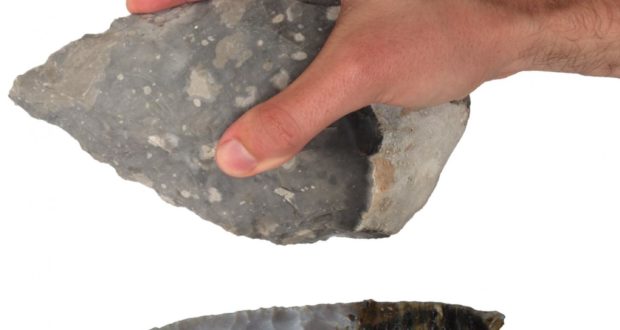 Representational image of stone tools halfa million years ago -- Comparison between a Handaxe and a Clovis Point CREDIT: Alastair Key and Metin Eren

Climate change familiar to these Chinese 1 million years ago

One million years old early stone tool used by hominins (early humans) has been unearthed by archaeologists in the Nihewan Basin, China which has thrown light on how the early civilizations were able to adapt to climate change and lead a sustainable living.

These stone tools show the skills of ancient humans who modified their tool manufacturing behaviour in Eastern Asia, said Shixia Yang, who led a team that examined three well-known archaeological sites from the Nihewan Basin in North China. The study has been published in the journal National Science Review. 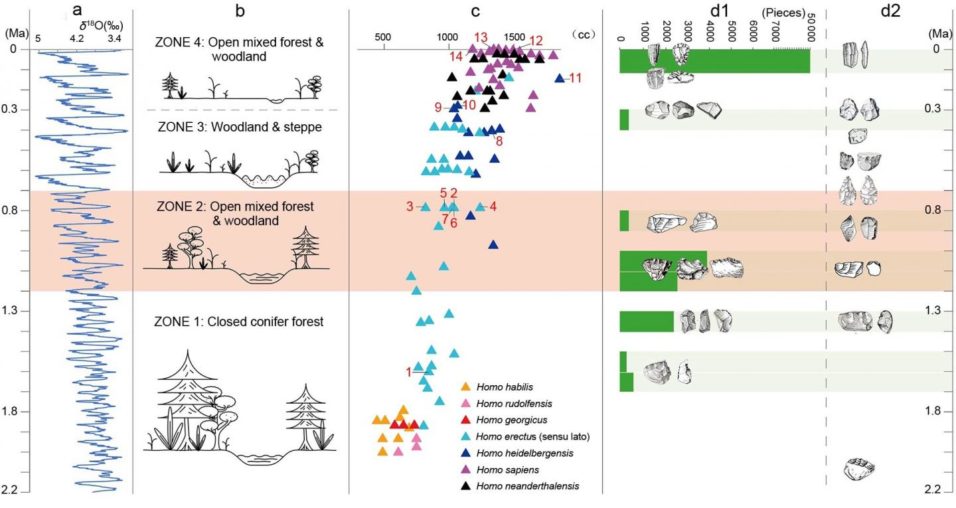 Comparing the stone tools from the archaeological sites of Xiaochangliang, Cenjiawan and Donggutuo, the archaeologists realized that these tools indicate that technological skills increase at ca. 1.1-1.0 million years ago. The stone tools at Cenjiawan and Donggutuo show increasing levels of manufacturing procedures and some degree of planning in the tool-making process to produce desired end-products, said the team.

The ancient technological innovations at ca. 1.1-1.0 million years ago in the Nihewan Basin coincided with a major climate transition which occurred between 1.2 million years ago to 700,000 years ago (called the Mid-Pleistocene Climate Transition), effecting a series of global and regional palaeoclimatic and palaeoenvironmental changes during the period such as increase in aridity and monsoon intensity and decrease in sea surface temperature in the North Atlantic.

Hence, at 1.1 million years ago the early human inhabitants of the Nihewan Basin lived under a changing and unstable environment, experiencing aridification. The climatic change also produced ecological changes, including landscape alterations and mammalian extinctions, but adapting novel technologies may have provided benefits to those who lived in the Nihewan Basin, said the study.

The unstable environmental conditions during the onset of this period provide a good example of the adaptive skills of early hominins in China, contrasting with the notion of long-lasting conservative behaviours recorded by other archaeologists, said the research paper.

Earlier studies showed that refined stone tools emerged half a million years ago. Research carried out at the University of Kent demonstrates that a technique used to produce stone tools is likely to have needed a modern human-like hand, such as the ability to perform highly forceful precision grips. 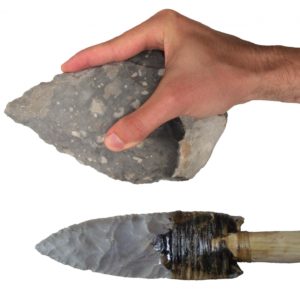 Image of stone tools half-a–million years ago — Comparison between a Handaxe and a Clovis Point
CREDIT: Alastair Key and Metin Eren

The technique involves preparing a striking area on a tool to remove specific stone flakes and shape the tool into a pre-conceived design. Platform preparation is key for making many different types of advanced prehistoric stone tool, with the earliest known occurrence observed at the 500,000-year-old site of Boxgrove in West Sussex (UK).

A study, led by Dr Alastair Key, of the University’s School of Anthropology and Conservation, and funded by the British Academy, investigated how hands are used to produce such early stones.

Using sensors attached to the hand of skilled flint knappers (stone tool producers), the researchers identified platform preparation using the hand to exert significantly more pressure through the fingers when compared to all other stone tool activities studied.

Since human hand bones rarely survive in the fossil record, Dr Key said: “Hand bones from before 300,000 years ago are rare, particularly when compared to other human fossils such as teeth, so the fact we can study the manipulative capabilities of our early ancestors from the stone tools they produced is incredibly exciting.”

The research demonstrates that the Boxgrove hominins  would have needed significantly stronger grips compared to earlier populations who did not perform this behaviour. It further suggests that highly modified handaxes discovered at Boxgrove and stone spear points found in later prehistory, may not have been possible to produce until humans evolved the ability to perform particularly forceful grips.