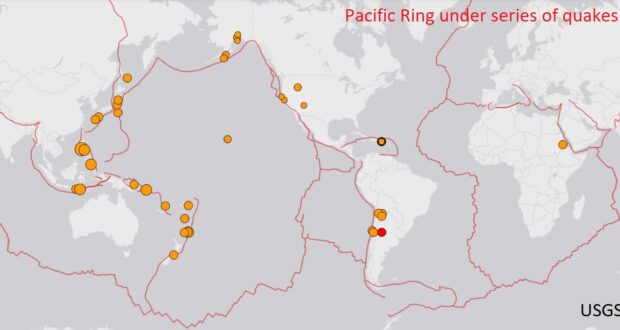 The continents of Asia, Australia and Americas surrounding the Pacific Ocean have experience 61 earthquakes ranging from 2.5 to 6.3 on Christmas Day, Dec. 25, 2020, indicating that the quake-prone zones are active again. The USGS has recorded more than ten on its quake map today to reiterate the tectonic disturbances beneath the surface, more prominently in the Philippines and in the southern Americas.

An earthquake measuring 6.3 on the Richter scale on Friday morning at 7:43 local time jolted the Philippines’ Batangas province located on the main island of Luzon, according to the Philippine Institute of Seismology and Volcanology (Phivolcs). Some 100-km south of Manila, the earthquake hit the region at a depth of 102 km, affecting nearby provinces of Batangas, Laguna, Cavite, Rizal.

However, the quake will not cause damage as it was tectonic in origin, though it may trigger aftershocks, said Phivolcs Director Renato Solidum. The possibility of tsunami was ruled out. So far, no reports of damage have been reported, said a spokesman for the National Disaster Risk Reduction and Management Council (NDRRMC).

Why so many earthquakes now?

The National Earthquake Information Center of the US usually records around 20,000 earthquakes around the globe per year, or approximately 55 per day. When it goes beyond this average number to more than 70, it may trigger intensified analysis by these seismic centres. Moreover, the instant communication via Internet has also increased the interest in natural disasters as the public are aware of earthquakes more quickly than ever before.