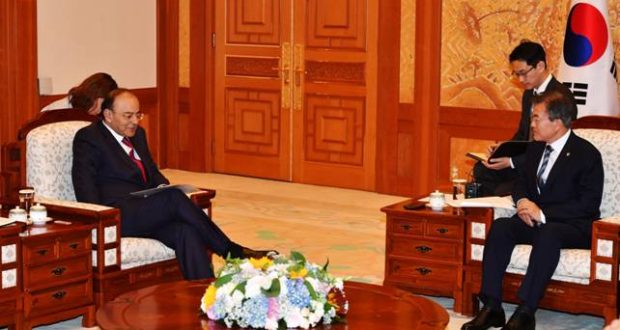 Indian Minister of Finance, Corporate Affairs and Defence Arun Jaitley met South Korean President MOON Jae-in on Wednesday and conveyed the good wishes of the Prime Minister of India. Complimenting President Moon for his vision for the region and the relationship with India, and recalling the PMs invitation to the President to visit India, FM hoped that the two leaders would meet soon.

Recalling the PMs congratulatory phone call of May 11, President Moon said there was a strong will on both sides in building the bilateral relationship. He also underlined that the decision appoint a Special Envoy to India, for the first time ever by a recently elected Korean President, was a strong sign of Korea’s commitment to the India relationship.

Conveying the appreciation of Prime Minister Mr. Narendra Modi for South Korea, Mr. Jaitley underlined that such initiatives coincided with India’s Act East policy, he emphasized India’s conviction that an internationally-minded Korea is good for both Asia and for other nations. He also briefed the President about his fruitful meetings with his Korean counterparts the previous day.

Jaitley expressed the need for the early convening of the bilateral Joint Commission and the 2+2 Dialogue, to further take the relationship forward. He stressed on the immense opportunity for the two countries to forge partnerships in defense industry, infrastructure investment and manufacturing.

President Moon lauded the bold economic reforms in India under the leadership of Prime Minister, Mr. Narendra Modi and Finance Miiister Mr. Jaitley, and shared his belief that India was on its way to becoming a true economic power. In the process, he hoped that South Korea would be a special partner and that the Special Strategic Partnership would continue to grow.

He noted the presence of India’s highly skilled professionals in Korea and hoped that such partnerships would continue to help both countries grow.   Earlier in the day, Jaitley had separate meetings with the senior leadership of premier Korean companies including the Vice Chairman of Hyundai-Kia, CEO of Samsung Electronics, Chairman of Hyosung Group, Managing Director of Hanwha Group, Chairman of Doosan Heavy Industries and the CEO of Hyundai Rotem.

Later in the afternoon, Finance Minister Mr. Arun Jaitley delivered the key note address at an India-Korea Business Meeting at the Lotte Hotel, co-hosted by the Korean Chamber of Commerce & Industry (KCCI), Embassy of India and Federation of Indian Chambers of Commerce (FICCI).