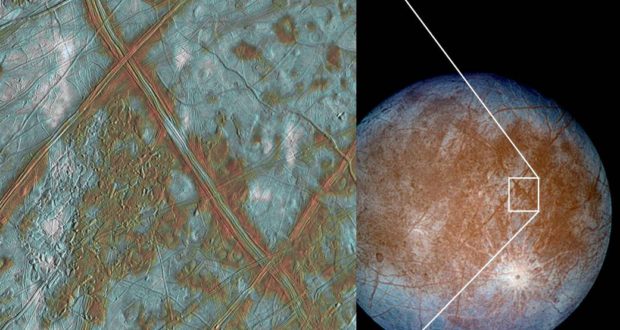 In this false color image of Europa, reddish-brown areas represent non-ice material resulting from geologic activity. White areas are rays of material ejected during the formation of the Pwyll impact crater. Icy plains are shown in blue tones to distinguish possibly coarse-grained ice (dark blue) from fine-grained ice (light blue). Long, dark lines are ridges and fractures in the crust, some of which are more than 1,850 miles long. These images were obtained by NASA's Galileo spacecraft during Sept. 7, 1996, Dec. 1996 and Feb. 1997 at a distance of 417,489 miles. Image Credit: NASA/JPL/University of Arizona

Anonymous Predicts NASA Announcement on Alien Life Soon; Will it be on Europa?

Not NASA but the global hacking group Anonymous has come out with a revelation that the US space agency is likely to announce the discovery of alien life.

Anonymous on their website said, “NASA says aliens are coming!” and there is no confirmation from NASA, which never reacted on such alien stories in the last seven decades. Anonymous has also uploaded a video citing alien-friendly comments made by NASA astronauts and space scientists.

Otherwise afficionados of UFOs (Unidentified Flying Objects) and aliens have long argued about sighting aliens on Earth but Anonymous group suggesting that NASA might announce the truth behind it saying, “something is going on in the skies above” is very intriguing at a time when alien organism on Mars was a likely truth, though it may not wholly back the theory of UFOs or aliens.

Anonymous quoted NASA rendering before a Congressional hearing in April titled “Advances in the Search for Life” that said: “NASA`s recent advances, such as the discovery of hydrogen in Saturn`s moon Enceladus and the Hubble team’s promising results from the oceans of Jupiter`s moon Europa, are promising signs that we’re closer than ever to discovering evidence of alien life.” Made by Professor Thomas Zurbuchen, Associate Administrator for the Science Mission Directorate of NASA, it had given enough hints at alien life, argued the hackers group.

“Taking into account all of the different activities and missions that are specifically searching for evidence of alien life, we are on the verge of making one of the most profound, unprecedented, discoveries in history,” Zurbuchen said.

Caught on that line, Anonymous has upped the ante over NASA disclosures to be made open for the first time since 1950. In September 2016, NASA announced a new discovery about Europa, an ice-encrusted moon of Jupiter that may be just like Earth in its features such as warm, liquid, and potentially habitable water.

Europa has a crust made up of blocks, which are thought to have been of a subsurface ocean at some time in its past. Combined with the geologic data, the presence of a magnetic field leads scientists to believe an ocean is most likely present at Europa today.

Will NASA made the next imminent announcement about some organism up there on Europa now? 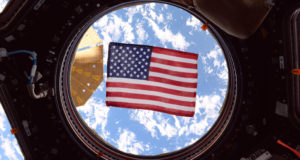