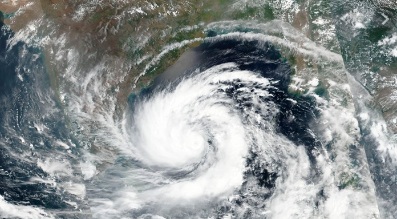 Cyclone Amphan from the Bay of Bengal wreaked havoc on eastern India and Bangladesh on Wednesday, killing at least 14 people and destroying thousands of homes, with officials struggling to evacuate and provide relief amid a surging coronavirus outbreak.

The populous Indian state of West Bengal took the brunt of Cyclone Amphan, with gusting winds of up to 185 km per hour (115 mph) and a storm surge of around five metres. West Bengal Chief Minister Mamata Banerjee said at least 10 people had died in the state, and two districts been completely battered.

“Area after area has been devastated. Communications are disrupted,” Banerjee said, adding that although 500,000 people had been evacuated, state authorities had not entirely anticipated the ferocity of the storm.“We are facing greater damage and devastation than the CoVID-19,” she said as the disease has so far killed 250 people in the state.

With rains continuing, the hardest hits areas were not immediately accessible, while the Centre asked the National Disaster Relief Force to move in and promised that they could make a proper assessment of the destruction on Thursday morning.

In neighbouring Bangladesh, at least four people were killed, reported Reuters quoting officials. Around 2.4 million people have been shifted to more than 15,000 storm shelters this week and Bangladeshi officials also said they had moved hundreds of Rohingya refugees from Myanmar, living on a flood-prone island in the Bay of Bengal, to shelter.

But officials said they feared that standing crops could be damaged and large tracts of fertile land in the densely-populated country washed away. “Fortunately, the harvesting of the rice crop has almost been completed. Still it could leave a trail of destruction,” said Mizanur Rahman Khan, a senior official in the Bangladesh agriculture ministry.

Cyclones frequently batter parts of eastern India and Bangladesh between April and December, often forcing the evacuations of tens of thousands and causing widespread damage.