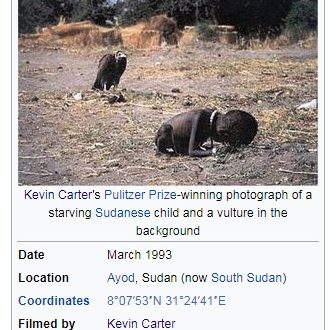 See the heart-wrenching picture above titled “The vulture & the Little Girl’ that was taken in 1993 and went on to win a Pulitzer Award for the famous photographer Kevin Carter of South Africa.

In the picture, a vulture is waiting for the death of a hungry little girl and Carter, a photojournalist, captured it in March 1993, when famine killed many children and elders in Sudan. He was awarded the “Pulitzer Prize” for it but Carter committed suicide soon after receiving the Award, at the age of 33, despite receiving worldwide recognition and applaud for his stunning photo.

But he never realised that the same photo would drive him to suicide.

When he was busy celebrating the great honor at the time of his receiving the award and the photo was being shown on many TV channels all over the world.

Someone asked in a phone interview as to what happened to the girl in the end?

Carter replied that he could not stay there for long as he was in a hurry to catch his flight.

“How many vultures were there?” He was asked again.

“I think there was one,” Carter said.

The man on the other end of the phone said, “I’m saying there were two vultures that day, one of them with a camera.”

Realising the significance of his words, Carter was obviously upset and eventually committed suicide.

Carter forgot the basic human instinct to help the ‘girl’ save from death. All he could have done was to take the starving baby to the United Mission’s feeding center, which was only half-a-mile away. The baby might have been trying to reach the center and a lending hand would have saved her for life time.

Sold to The New York Times, the photograph first appeared on 26 March 1993, and the paper said that according to Carter, “she recovered enough to resume her trek after the vulture was chased away” but that it was unknown whether she reached the UN food center.” Next year, the photograph won the Pulitzer Prize for Feature Photography.

In 2011, the child’s father revealed the child was actually a boy, Kong Nyong, and he had reached the UN food aid station. The boy survivied the vulture but died of fever in 2007, reported El Mundo quoting the family. The reporter described the boy as girl and received Pulitzer but failed to take the boy to the nearest aid station. If he had, he would have realised that it was a boy.

Today, almost 26 years after, many TV channels have been highlighting the plight of migrant workers and the plight of their children and even infants. But the twist is that the picture of Carter has been used to pronounce that those with cameras in their hands, busy taking pictures of workers walking thousands of kilometres, are similar to such vultures. Had it not been for these visuals, the governments today would not have moved to help them.

“Kevin Carter had self-esteem, so he committed suicide, but the vultures named after this journalist are busy making breaking news with dignity,” writes one circulating the message on WhatsApp.

Yes, these news gatherers get incentives from the government in the form of perks such as early coronavirus testing facilities but the numbers are not one but millions of them. No one reporter could have saved them the way Carter would have done so. With TV exposure, the migrant labourers and their children could not have been saved in India. Criticizing the whistleblower is also against humanity.