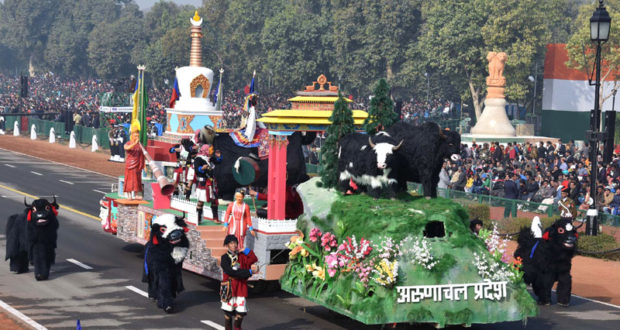 The tableau of Arunachal Pradesh passes through the Rajpath during the full dress rehearsal for the Republic Day Parade-2017, in New Delhi on January 23, 2017.(PIB Photo)

This year Republic Day Parade on Rajpath will witness tableaux from 17 States and Six Ministries of the Central Government, showcasing themes starting from country’s rich cultural heritage and socio-economic development to nation’s progress in IT, Women, Empowerment and Environment Protection.

The UAE Crown Prince is going to be the Chief Guest at 2017 Republic Day parade.

Arunachal Pradesh, in its tableau, seeks to depict the Yak Dance, one of the most famous pantomimes of the Mahayana sect of Buddhist Tribes of Arunachal Pradesh where a masked dancer represents the members of a family who are said to have discovered the Yak with the help of a magical bird hundreds of years ago. The Yak is the most useful animal of the northeastern tribes which believe that the discovery of the Yak resolved the family’s internal property disputes and provided a permanent source of prosperity to the entire community.

Gujarat will showcase the Art and Lifestyle of Kutch with 16 different types of embroideryand the Rogan art, Mud work and the art of making Bhunga. LAKSHADWEEP will focus on Tourist Destination while Karnataka presents traditional folk dances of the Goravas, the worshippers of Lord Shiva engaged in the traditional ritualistic dance. 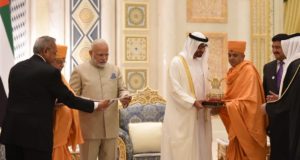 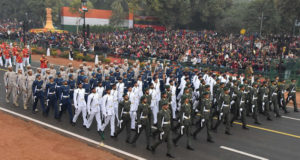