In a bizarre incident that was caught on camera and going viral all over India, a young engineering Dalit student who married an upper caste girl was hacked to death in a bazaar road in Tirupur, a city known for its knitting garment exports all over the world.

The chilling video footage shows that three men killed Shanakr, 23, in view of the public on the road and then attacked his wife Kausalya, 19, who is reportedly in critical condition and her father surrendered to the police.

The police have sent out five teams of police to catch the attackers, while they believe two more will be behind the murder that shook the entire country close on the heels of outrage over the HCU dalit student Rohith Vemula’s suicide a month ago.

The couple were married eight months ago against the wishes of the girl’s parents who belong to Thevar community, supposedly a powerful upper caste in Tamil Nadu. 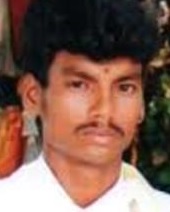 And soon, they got on to their motorbike and sped away from the scene. It was not from any Tamil film but a real chilling incident that has shocked the entire nation and the video is going viral on YouTube.

Sankar’s father Velu Samy told media:”We thought her parents would accept them but it has ended in this bloody tragedy. We have lost him.”

Thevar community takes pride in its divine origin and zamindari traditions and was known to have practised female infanticide in the past.